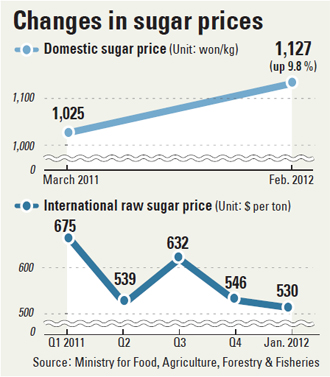 Local sugar firms expressed their dissatisfaction yesterday with the government’s decision to import sugar directly from overseas in a bid to lower overall consumer prices.

On Sunday, the government announced that the Ministry for Food, Agriculture, Forestry and Fisheries would, in conjunction with the state-run Korea Agro-Fisheries and Food Trade Corporation, start importing sugar directly from Southeast Asian countries such as Thailand in order to drive down local sugar prices.

Supplying sugar directly to processing firms will inevitably force CJ Cheiljedang, Samyang and TS to revise down their retail prices.

“This is clearly aimed at making us lower the prices of our sugar products,” said an industry official. “It is bad news for us considering the fact that domestic sugar companies have been posting chronic losses.”

The official said his company had wanted to raise its prices to improve its bottom line, but had refrained from doing so to support the government’s recent price stabilization efforts.

According to industry sources, three companies have posted combined cumulative losses of 170 billion won ($150.4 million) over the past two years.

The government said the move is designed to promote fair competition and ease the burdens faced by consumers.

“Our decision comes as part of efforts to promote more competition in the local sugar industry, which will eventually help stabilize the pricing of processed foods,” the food ministry said in a statement.

According to the ministry’s plan, it will import 10,000 tons of sugar this month and gauge the amount to be shipped in on subsequent months based on demand. The decision was made as prices of sugar on the domestic market have remained the same despite a recent plunge in international sugar prices.

In January, the international price of raw sugar dropped to $530 per ton from $675 per ton in the first quarter of last year. However, local sugar prices have been frozen since last March, when three sugar companies all raised their prices by 9.8 percent from 1,025 won to 1,127 won per kilogram. The three companies currently supply 97 percent of domestic demand.

“Sugar is a major ingredient for most processed foods,” the ministry said. “Adjusting the price will help lower consumer prices overall.”

The government has been fighting rising inflationary pressure since early last year as the price of raw materials and international oil has soared. It has also been criticized for doing a poor job of keeping a check on prices and placing more of a burden on regular households, who are increasingly turning to loans from banks and nonbank financial institutions to stay afloat.

“When the international sugar price surged to a 30-year high in February last year, we didn’t raise our local prices,” complained an official from CJ CheilJedang. “It is unfair that price changes are only reflected when they go down.” Meanwhile, the stock prices of local sugar manufacturing firms also fell sharply yesterday.