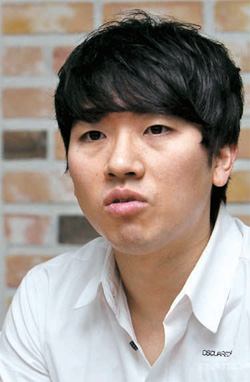 A popular fantasy fiction author has put down his pen in order to battle illegal Internet piracy of his novels, having sued over 300 cases of alleged copyright violations.

Park Seong-ho, 29, who published fantasy novels, including “Iris” and “Syndicate,” for 12 years hasn’t published a book for the second year in a row.

He says his silence is due to illegal downloading of his work through the Korean file-sharing Web site Webhard. Internet users post download links on their personal blogs, leading to his books being shared freely or for small amounts of money online.

Every last Wednesday of the month since June 2011, Park has filed dozens of copyright violation complaints at the Yangcheon District Police Station in southwest Seoul near his house. Last month alone, he filed 35 cases.

“At one time, I was a popular author. One novel sold 20,000 copies, and I earned proceeds of 10 million won [$8,890] monthly,” Park said. “But now, new books don’t sell because when they are released, they are uploaded to the Internet the next day, so it’s difficult to even earn a living.”

Profits from genre fiction, including genres popular in Korea such as fantasy and martial arts fiction, have declined. Readers download the books for small fees online, which middlemen keep.

Other authors have given up writing. But some are trying to fight back.

According to the Writers’ Association of Popular Korean Literature, in January there were 120 authors who filed a total of 1,339 of copyright infringement complaints. Writers in the association spend hours a day surfing the Internet to get screen grab evidence of their books being illegally uploaded for use in their complaints.

Author Kim Gwang-su, 39, a member of the association, said, “A 30-volume series was put on sale, and the very next day, the books were converted into text files on Webhard and sold at 70 won per volume.”

Kim admitted, “I have three kids, but at this rate, it will be hard to earn a living.” Last month, he filed 130 complaints.

Another author surnamed Jang, 40, who has been publishing for eight years, told his publisher he is retiring and found a job as a hospital security guard. Though he had a loyal readership for seven years and published over 40 novels, current earnings from his books are less than a million won, and he can no longer earn a living.

“As sales decreased, excluding bestselling novelists, established writers’ royalties compared to 10 years ago have decreased 50-75 percent, and new authors can receive only 200,000-300,000 won per novel,” said a representative of one publisher. “It’s a vicious cycle where more established writers are leaving and fewer new writers are recruited.”

According to Kim Hwan-cheol, 56, president of the Writers’ Association and a popular martial arts author in the 1980s who wrote under the pen name Geumgang, said, “When caught, over 40 percent of file uploaders on Webhard are middle and high schoolers who make an appeal claiming that they didn’t know they were doing wrong.” They claim they “only earned a couple thousand won” selling the illegally uploaded novels, he said.

“But when these uploaders group together 15 novels into one downloadable pack, which can be downloaded for 20 won, authors lose everything,” he said.

“Netizens complain that the writers’ suits are motivated for settlement money,” he said, “But authors have that right. Netizens need to know that Internet piracy is illegal and has a bigger impact on writers than that on movies and music.”

“If writers disappear, readers will not get good literature,” said Professor Kim Seok-hwan of the Department of Korean Language and Literature at Myongji University. “Protection against copyright violation needs to be reinforced for those authors who dream of writing the next Harry Potter book.”