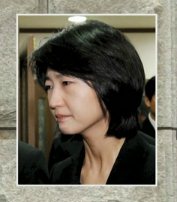 The Supreme Prosecutors’ Office appears to be reopening the investigation of bribes paid to former President Roh Moo-hyun that led to his 2009 suicide.

The office yesterday advised Kyung Yeon-hee, 43, to come to Korea for questioning from the U.S. Kyung signed a contract to sell her apartment in the upscale Hudson Club complex in New Jersey to Roh’s daughter in 2009.

In 2009, the prosecution was attempting to prove that part of the payment for the apartment was from bribe money allegedly paid to Roh by Park Yeon-cha, former chairman of Busan-based shoemaker Taekwang Industrial, one of his wealthy supporters. The investigation into Roh and Park’s dealings was halted after Roh committed suicide on May 23, 2009.

The prosecutors said Sunday they launched the investigation upon a request recently made by the National Action Campaign for Freedom and Democracy in Korea, a conservative group. This follows an article published in the Monthly Chosun magazine in February that asserted that the former president’s daughter, Roh Jeong-yeon, attempted to purchase the luxury apartment in Manhattan through a man surnamed Eun.

The Central Investigation Division at the Supreme Prosecutors’ Office said it arrested Eun, 54, on Saturday for violating the country’s foreign exchange law.

According to the prosecutors, Eun received seven boxes of banknotes worth 1.3 billion won from a Korean-American surnamed Lee, changed the money into U.S. dollars and sent the money to Kyung, the apartment owner, in January 2009. Some was wired, and some hand-carried by Kyung, according to prosecutors.

After questioning, Eun was released on Sunday. Prosecutors said that they also questioned Lee and his brother, who allegedly delivered the money to Eun.

According to the article in Monthly Chosun, “Kyung purchased the apartment for $1.7 million but sold it to Roh Jeong-yeon for $2.4 and made about $700,000 in profit.”

During its investigation in 2009, the prosecutors confirmed the daughter transferred $450,000 as a down payment to Kyung after deciding to purchase the apartment for $1.6 million, but former president Roh later explained that the “contract was vitiated upon failing to pay the remainder.”

Prosecutors suspected that $1.4 million of the money paid to Kyung was from bribes paid by Park Yeon-cha.

An official from the Supreme Prosecutors’ Office said they are investigating the case “in an attempt to settle down suspicions raised by the public.” He added, “There needs to be an investigation into Kyung first, who is currently in the U.S., then the decision will be made whether to investigate Roh’s daughter or not.”