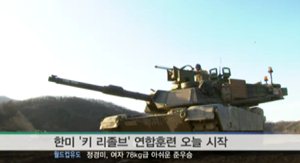 South Korea and the U.S. kicked off their joint Key Resolve military exercise yesterday, as North Korea issued yet another threat to strike back.

Key Resolve, which will go on until March 9, will involve about 200,000 South Korean troops and 2,100 U.S. troops. About 800 more U.S. participants will come from outside South Korea, according to the South Korea-U.S. Combined Forces Command.

Officials have stressed that Key Resolve is “routine and defense-oriented” and was planned months in advance, with no connection to current international affairs.

They also said Australia, Canada, Denmark, Norway and Britain, members of the UN Command, will take part as observers.

North Korea routinely denounces the Key Resolve drills as precursors for an invasion.

On Monday, North Korea accused the two allies of being “poised for a war carrying nuclear war equipment” and dubbed the South and the U.S. “warmongers.”

“The war drills are an unpardonable infringement upon the sovereignty and dignity of the DPRK as they evidently target the DPRK, which is in the mourning period” after the death of former leader Kim Jong-il, said a report on the Korean Central News Agency, Pyongyang’s state media. DPRK stands for the North’s official name, the Democratic People’s Republic of Korea.

“The army and people of the DPRK are fully ready to fight a war with them,” the report added.

Last Saturday, Pyongyang had vowed to launch a “sacred war” against South Korea and the U.S. In light of that threat, the South and the U.S. on Sunday heightened their alert against North Korea.

They have fully mobilized their surveillance assets, such as radar and reconnaissance planes, and the South’s Air Force placed its F-15K fighters on emergency standby.

Another joint exercise, Foal Eagle, will take place from March 1 to April 30 and include about 11,000 U.S. forces plus South Korean troops in division-sized or smaller units, officials have said. Yonhap