Spot in World Cup on the line

Spot in World Cup on the line 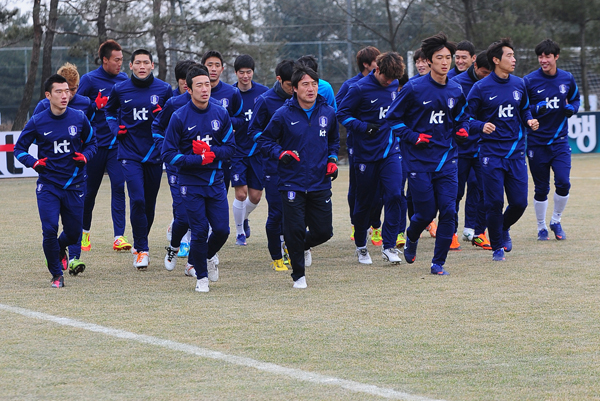 
Korea, fighting for its eighth consecutive FIFA World Cup appearance, faces Kuwait at 9 p.m. tonight at Seoul World Cup Stadium in what is the most crucial qualifier yet, determining whether or not the country will compete in Brazil in 2014.

If Korea wins or draws, the Taegeuk Warriors advance to the final round of the Asian qualifiers. If Korea loses and Lebanon wins against the winless United Arab Emirates, then Korea will not compete in the World Cup for the first time since 1982.

Two teams from each group advance to the final round. Korea is currently tied with Lebanon atop Group B with 10 points, but is ahead comfortably on goal difference (plus eight compared to Lebanon’s minus two). Kuwait currently sits in third with eight points.

The game tonight will be the first competitive match for coach Choi Kang-hee, who took the helm after the Korea Football Association’s controversial firing of Cho Kwang-rae.

Cho was let go after a 2-1 loss to Lebanon in a November World Cup qualifier.

“We all know the importance of the match,” Choi said yesterday during a press conference at Seoul World Cup Stadium.

“But since we trained hard and are mentally well prepared, we are going to get a good result.”

Korea, ranked 34th in the FIFA rankings, is favored over 91st-ranked Kuwait. But the overall head-to-head record shows that Kuwait has not been an easy opponent for the Taegeuk Warriors. Korea has won eight times, drawn four and lost eight against Kuwait. The two teams drew 1-1 in their first encounter last September.

Kuwait has been training in Korea since last Thursday. Since the Gulf nation can also advance to the next round with a victory, local football pundits predict the match will be tight until the final whistle.

Choi was able to see his tactics in action when the national team beat Uzbekistan 4-2 in a friendly on Saturday.

Among the national team players, Jeonbuk Hyundai Motors striker Lee Dong-gook shined on Saturday, scoring two goals in the first half. The 33-year-old veteran striker is also expected to lead the team’s attack tonight. He has a history of performing well against Kuwait. Four of his 27 international goals have come against the Gulf nation.

But Choi’s dilemma will be how to utilize two European-based footballers - Arsenal striker Park Chu-young and Celtic midfielder Ki Sung-yueng - who didn’t feature in the match against Uzbekistan. Both arrived in Korea on Monday and trained for just one day.

Arsenal striker Park, who gave up the captain’s armband to defender Kwak Tae-hwi, hasn’t played much with the North London club, but he has scored eight goals in his last five matches for Korea.

Meanwhile, 23-year-old Ki played for 90 minutes against Motherewell in the Scottish Premier League on Sunday and might be fatigued due to the traveling.

“I picked both players because I needed them,” Choi said. “But I have to think lot about how to use these players tactically until the end of today.”