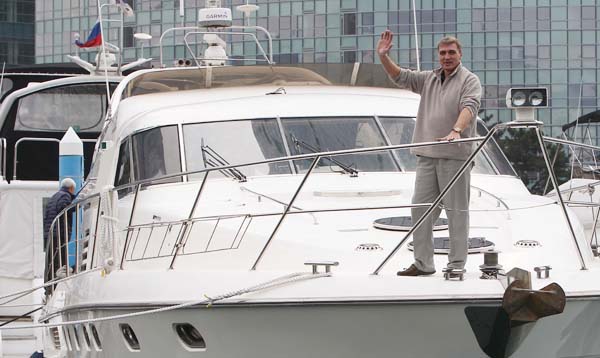 Captain Alexsandr Pokoevich stands on the bow of his 19.8-meter yacht, 2nd Edition, moored at the Suyeong Bay Yachting Center in Busan. By Song Bong-keun


BUSAN - Venya Rezanov of Russia stands on the bow of his yacht donning a T-shirt and jeans, undaunted by the Korean winter.

Moored at gate three of the Suyeong Bay Yachting Center in Busan, Rezanov’s 19.8-meter yacht - named 2nd Edition - has been home to three Russians for more than five months, and they have no plans to leave anytime soon.

Busan has seen a rising number of Russian yachts as Vladivostok and other northern ports freeze over during the winter.

Of the 293 yachts currently docked at the center, 10 percent are now owned by Russians.

“Hospital, pharmacy and convenience store are all close by,” said Alexsandr Pokoevich, captain of the 2nd Edition. “Meat and daily necessities can be delivered.”

It was three years after the establishment of diplomatic ties between Korea and Russia when the first Russian yacht docked in Busan. Since then, the number has risen steadily, and now around 20 to 40 yachts visit the center every year.

Most are luxurious boats that sailors live in for over five months, with kitchens, bedrooms and bathrooms inside.

The Russian yachts are mostly over 20 meters long and stay at the bay from September or October to May or June.

If the yachts are docked at Russian ports over the winter, the bodies of the ships can be partly crushed and navigation devices can be damaged due to the ice and freezing weather.

Therefore Russians sail their yachts south to avoid the potentially devastating cold weather. Busan is both warm enough and geographically convenient, and has thus emerged as a popular destination for Russian sailors.

Suyeong Bay has become a hotspot during the winter because dock rent is relatively cheap compared that of Japan and Taiwan. The Busan center charges a flat rate of 370,000 won ($330) regardless of a ship’s size, and electricity and water usage are provided for free.

Another reason why Russians are choosing to dock their luxurious yachts at Suyeong Bay is because the route to the bay is convenient and easy.

Some 1,100 kilometers (684 miles) separate Russia and Busan, which takes an engine-equipped power yacht around two days, and a sailing yacht four to six days to cover. This is a relatively short distance for sailors looking to escape Russian winters, and with rising fuel costs, Busan is becoming a more appealing option.

The rise in luxurious Russian yachts not only helps Busan yacht management firms such as Power Marine, but also helps the regional economy as a whole.

Sailors’ families often fly in through Busan Airport and stay in hotels during their visit.

The surge in Russian yachts filling up Suyeong Bay has been welcomed by the region.

Some citizens have voiced that improvements to the docks should be made to encourage more sailors to winter in Busan.

“There were a lot of times when Russian yachts had to go to the Philippines or Taiwan, since Suyeong Bay did not have space available,” said Kim Hak-chul, president of Power Marine.

“There should be a systematic plan for stationing more yachts.”