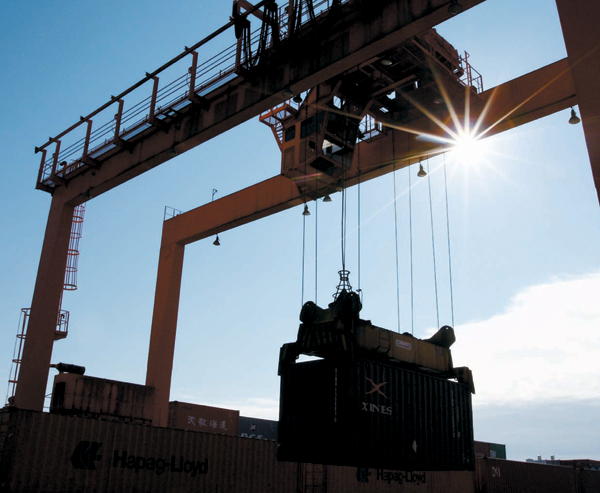 The global economic slowdown resulting from the credit crisis in Europe has finally taken its toll on the nation’s current account balance, which posted a deficit in January for the first time in nearly two years.

The major contributing factor was a sharp drop in exports, with the euro zone debt crisis in particular hampering demand from the region since the middle of last year. 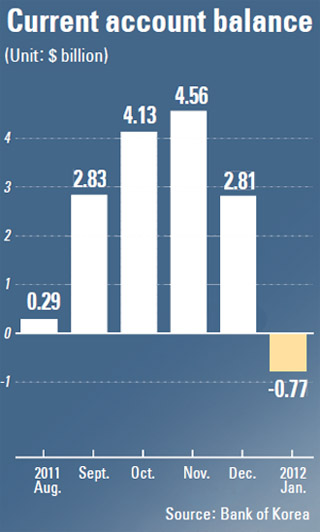 And the situation is likely to get worse as China’s economy is expected to face a soft landing this year, while the upswing in international crude prices and the strengthening of the Korean currency against the U.S. dollar are putting further pressure on the nation’s trade balance.

Yet the central bank was confident that this month’s current account will post a surplus as outbound shipments of steel and automobiles remain buoyant.

According to the Bank of Korea yesterday, the current account balance posted a deficit of $770 million in January. This is the first deficit since February 2010, when it stood at negative $550 million.

Korea’s exports fell 7 percent to $41.5 billion in January from one year earlier, while imports grew 3.3 percent to $42.9 billion over the same period.

Exports to South America, where Europeans invest huge sums of their wealth, fell 22.9 percent, while those to China, which accounts for roughly one-quarter of the total, retreated 2.3 percent. However, it was Europe that dealt Korea the biggest blow.

The Continent received 37.9 percent fewer goods from Korean firms in January for a monthly total of $3.9 billion, leading Korea’s overall balance of trade to post a deficit of $1.42 billion.

Improvements in the nation’s service account deficit - which shrank from $210 million in December to $130 million last month on the back of better logistics and service businesses - have also failed to kick-start the current account.

Meanwhile, the capital and financial account, which covers cross-border investments, posted net inflow of $1.22 billion in January, compared to a net outflow of $3.5 billion in December. With the price of international crude continuing its upward momentum, among other worrying trends, there seems to be little sign that the situation will get better anytime soon for Asia’s fourth-largest economy. The per-unit import price of international crude shot up 17.5 percent last month from the start of 2011 to rest at $112.5 per barrel. As of yesterday, it had risen to $114 per barrel. This is not higher than last year and also worse than the figure that the BOK projected for 2012, or $102 per barrel on average.

The central bank forecast that by the end of this year, the nation’s current account balance would post a surplus of $13 billion, or roughly half of the $27.2 billion recorded last year, but this would likely be further eroded if the price of oil continues to creep up.

Additionally, the strengthening won is another fear factor for Korean exporters. The local currency, which fell to almost 1,200 won against the greenback last year, appreciated to 1,140 won last month and is now trading slightly below this range. If this trend continues, Korea will lose more of its price competitiveness in terms of exports.

The winding down of China’s economy poses another threat to Korea. Earlier this week, World Bank President Robert Zoellick told reporters in Beijing that China’s economy is probably heading for a soft landing in the near future. The bank envisages 8 percent growth for China this year compared to 9.2 percent in 2011. However, Korea’s central bank remained upbeat despite all the risks.

“Exporters are faring well,” said Yang Jae-ryong, head of the financial statistics department at the central bank. “Exports of automobiles and steel are doing extremely well, while the number of working days has increased since January, when they were interrupted by the Lunar New Year holiday. Also, the business sentiment index by exporters has become more favorable recently.”

The central bank added that rising oil prices do not necessarily spell bad news for the overall current account balance. “Of all the crude we import, 40 percent is refined [turned into other products] and later exported,” Yang said. “So higher oil prices also mean larger profits for exporters.”