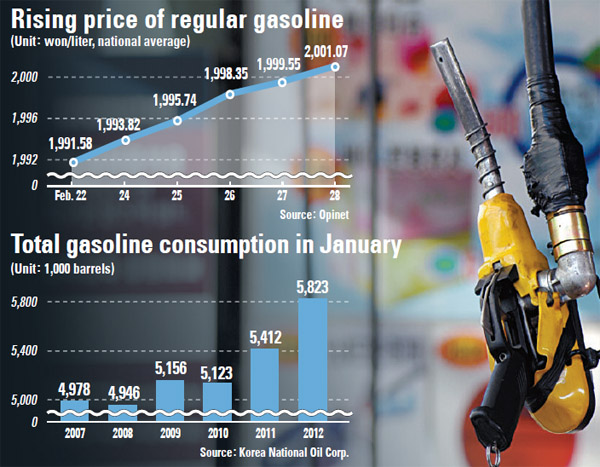 The country’s retail gasoline price hit another record high, but that hasn’t stopped drivers from stopping at the pump.

“Gasoline is not price elastic,” said an employee at Korea National Oil Corp.

This means that even if gasoline prices rise, its consumption tends to remain at the same level.

The January figure represents a 7.6 percent increase compared to a year ago.

Growing gasoline consumption is the result of the ever-increasing number of vehicles in the country.

The number of passenger cars registered in Korea rose to 14.2 million in January from 14.1 million at the end of last year and 13.6 million in 2010.

“Even though consumers are surprised by high oil prices, they accept the price as it is,” the KNOC employee said.

“Gasoline consumption usually falls when its price rises but now its usage is growing instead,” said an employee at a local refinery.

The government said it is looking into the distribution of gasoline to see why its usage continues to rise.

However, the use of kerosene and diesel fuel declined in January compared to a year ago. Kerosene consumption fell by 34.5 percent on-year while diesel oil sales declined 2.3 percent.

The gas price increased for the 53rd consecutive day since Jan. 5 as the price of Dubai crude oil rose to over $120 per barrel due to growing tensions between the U.S. and Iran.

The price of Dubai crude reached $122.56 per barrel on Monday.

According to a report by J.P. Morgan, the Brent oil price is expected to reach $135 this year, far above its previous expectation of $120.

According to the Korea Energy Economics Institute, if Iran closes the Strait of Hormuz, international crude oil prices could hit $180 per barrel in the short term.

Meanwhile, Korea reportedly agreed to reduce crude oil imports from Iran by a degree to get near the U.S. Congress’s suggested guideline of 18 percent, according to Yonhap.

“We didn’t give a specific figure, but we explained about how local refineries operate and global oil market trends so that the U.S. could understand what would be an appropriate level of reduction for us,” a Korean government official told reporters on condition of anonymity.

The Korean government intends to make a decision on the matter by June.