Djokovic surname can be a burden for brother

Djokovic surname can be a burden for brother 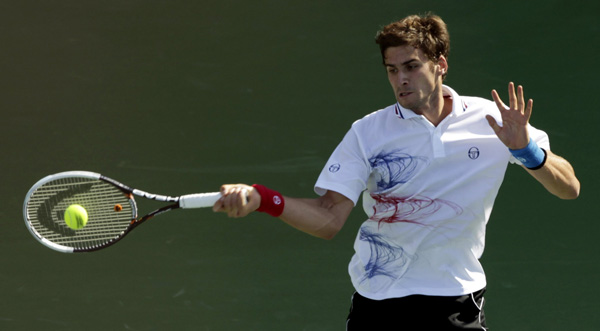 Marko Djokovic hits a return to Andrey Golubev during their singles match at the ATP Dubai Tennis Championships on Monday. [REUTERS/YONHAP]


DUBAI, United Arab Emirates - Being the younger brother of world number one Novak Djokovic has plenty of advantages but world number 869 Marko is finding that the surname is not always one of them as it seems to make opponents raise their game.

The 20-year-old Serb was playing in the Dubai Championships where his all-conquering brother is defending champion and despite a strong start against Kazakhstan’s Andrey Golubev, he succumbed 6-3 6-2 in the first round on Monday.

His association with five-times grand slam champion Novak has opened doors for the younger Djokovic, for instance in terms of coaching, but in matches the name can work against him.

“They’re trying more. I played qualifiers and futures and was coming back from the injury, and it was really tough. I had to fight for every point,” Marko, who injured his wrist at the start of 2011 and did not play for 10 months, told reporters.

“So this is the big difference when they play against me and then when I see them playing against somebody else.”

Novak, who by Marko’s age was already number three in the world and had the 2008 Australian Open title under his belt, said it was hard for his brother to live up to the comparisons.

“It’s his burden, and he’s very committed. He wants to succeed in tennis. But everybody obviously has a different path. We have a younger brother who is 16 years old who is coming up, so hopefully they can become world-class players.”

Novak, who watched his brother’s match courtside before winning his own first-round encounter against Germany’s Cedrik-Marcel Stebe 6-4 6-2, said Marko faced a mental battle more than anything if he wanted to succeed.