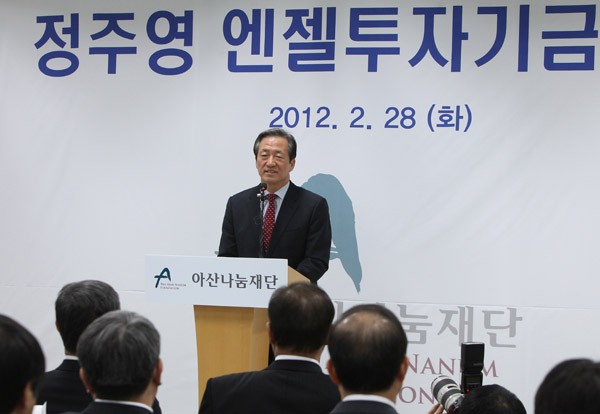 Lawmaker Chung Mong-joon makes a speech at a press conference to announce the launch of the Chung Ju Yung Angel Investment Fund at the Chung Ju Yung Campus of Entrepreneurship in southwestern Seoul yesterday. [YONHAP]

A charity foundation dedicated to the memory of Hyundai Group founder Chung Ju-yung has launched a drive to promote “angel investments” in Korea to encourage young innovative entrepreneurs and possibly produce a Korean version of Google’s Larry Page or Apple’s Steve Jobs.

So-called angel investors put money in small businesses at early stages, and there aren’t enough of them in Korea.

As of 2010, the total amount of angel investment in the country was around 32 billion won.

The new fund is triple that amount.

The nine companies shared the view that there is an urgent need for investments in startups to decrease youth unemployment and create innovative growth engines for the future.

“We are raising this fund to give young people the chance to take on a challenge, experience and overcome failure, and ultimately make their dreams come true,” said Chung Jin-hong, chairman of the foundation.

“To not invest in our youths’ dreams makes our society look stingy. And if we fail to do that, we can’t produce great entrepreneurs.”

There hasn’t been much angel investment in Korea, said an official at the foundation, because it requires patience and the ability to take a risk on an unproven idea.

After making an angel investment in a small startup, it takes at least seven years to recover the money, according to the official.

The foundation will forge partnerships with financial institutions with expertise in angel investment, the official said.

It will be looking at startups in IT convergence and high-tech agriculture.

Chung Mong-joon, honorary chairman of the foundation and the fourth son of Hyundai’s founder, said the family was marking the 11th anniversary of his father’s death.

“He would be very happy about the launch of the fund,” said Chung, who is a former leader of the ruling Saenuri Party.

Chung told an anecdote about his father.

The late chairman opened a garage with money he borrowed from an illegal money lender, but the shop got robbed.

Chung told the lender he wouldn’t be able to pay him back the money. However, the lender trusted Chung and unexpectedly lent him more money to resume his business.

“That was a kind of credit loan,” Chung said, saying it required the kind of trust angel investors must have in the startups they fund.

“If that man didn’t lend the money to my father, there would have been no Hyundai Group today,” Chung said.

The Asan Nanum Foundation was established last October with an initial funding of 500 billion won, led by lawmaker Chung Mong-joon.