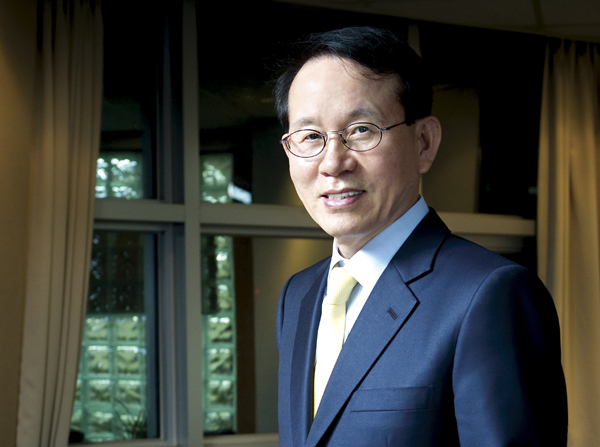 
Anyone can easily get access to English-language magazines, books, comics and other educational materials nowadays, but there were only a few choices back in the 1980s and early 1990s. Thus, people who wanted to learn English often tuned into the American Forces Network, dubbed AFKN back in those days, or English-language programs on national networks. One of them was the early morning TV show “Min Byoung-chul’s Everyday English” on KBS. The show aired every morning for 10 years and Min Byoung-chul became synonymous with English education. He is still considered a pioneer in the area. Books published under his name have become hits and an English hagwon (private school) chain of his own has also prospered.

Min could have settled for the life of a successful businessman and educator, but he went further than that. He launched Sunfull Movement Campaign back in 2007 and has become an ardent activist encouraging people to leave goodwill messages on the Web instead of malicious comments. “Sunfull” is the English pronunciation of a Korean term meaning goodwill messages. Min currently works as a professor of international studies at Konkuk University and also serves as a chairman of BCM Educational Group.

The JoongAng Ilbo sat down with Min and asked him questions ranging from his early days to the Sunfull Movement.

Q. Do you think there is a link between goodwill messages and English-language education?

A. We learn English because we want to communicate with others and one of the basic elements of communication is having good manners. Malicious comments are far from good manners.

Was there a crucial moment that spurred you to launch the campaign in the first place?

I was shocked to realize that a young female singer named U;nee committed suicide because of malicious comments over the Web back in 2007. Her personal Web page was full of swearwords and rumors that were actually unspeakable. So I asked my 570 students, who were taking my English-language classes, to leave positive messages at the personal Web pages of at least 10 celebrities and submit them as homework. It was mandatory but it eventually encouraged students to leave 5,700 positive messages over the Web in an instant. I wanted to stop this negativity because everyone, including celebrities and young children, were exposed to the malicious comments - it’s a real social problem.

Why do you think we have so many malicious comments over the Web?

School curricula are way too focused on better grades and children have no chance to learn other important things. They need enough time for physical education classes and to volunteer, but they just learn math, English and Korean literature.

Then what is your solution?

It might encourage people to do volunteer work for compensation, not for a good cause.

Compensation is needed for donation and volunteer works, I believe. A rich man, a 100-year-old man or even a little child feel flattered when they are complimented.

You started your career at such a young age even before you graduated from college. Are you a natural-born English speaker?

I got close with the son of Australian missionary who was visiting Korea back in the 60s. His name was Greg and we used to go to church and eat together. I still remember the food that we ate together, such as spaghetti and meatballs. I had to explain many things about Korea and it naturally helped me develop into a good English speaker. I landed a job as an English-language instructor when I was a senior, even before graduation, for a KBS radio show. I think I was lucky.

You later taught Korean immigrants English in Chicago after you made a name for yourself with the radio show. What was it like?

In the States, people who graduated from elite Korean colleges worked at sewing factories, while pharmacists here worked as laborers there - all because they couldn’t speak and understand English, even though they had high-level reading and grammar skills. I knew a Korean who was reading Time magazine during his work break. His American factory manager asked him whether he could read it. He said yes, but his boss sneered at him, incredulous, since the Korean rarely understood the English that was spoken to him.

Many Koreans still find it difficult to speak in English.

Do you know why Koreans can’t speak English well even though we’ve been learning it for more than 10 years? We never really had a chance to practice it. The purpose of learning English is communicating with English-speaking foreigners, but most grown-up Koreans spend their time learning grammar and reading skills.

Children these days start to learn English at such an early age.

Much of English-language education in Korea is focused on mastering perfect grammar and pronunciation. If you get access to English this way, you can’t be a good English speaker no matter how much time you spend on it.

Give us a tip on how to become a good English speaker.

Company workers need different expressions depending on their work. Come up with 365 pairs of useful question-answer expressions. Record them and repeat them 100 times each.