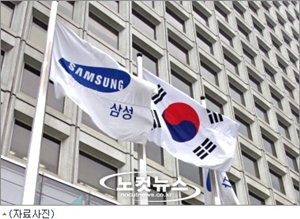 The inheritance dispute involving Samsung Group, Korea’s largest business group, is expanding, as siblings are lining up to demand what they regard as their fair share of the inheritance collected by Samsung Electronics Chairman Lee Kun-hee, one of the world’s wealthiest men.

Lee Sook-hee, the older sister of Lee Kun-hee, has filed an inheritance suit against him, demanding that he give her some 190 billion won ($169 million) in shares of Samsung affiliates left by Lee Bung-chull, their late father who founded the Samsung business empire, according to a law firm yesterday.

The news comes just two weeks after Lee Maeng-hee, the older brother of Lee Kun-hee, filed a similar lawsuit against Chairman Lee demanding some 710 billion won in shares of Samsung subsidiaries plus a cash payment.

Observers say that other siblings may now be emboldened to follow suit, which could threaten the envisioned power succession in Samsung’s business empire to Chairman Lee’s sons and daughters.

Lee Kun-hee had seven siblings, although one of his brothers, Lee Chang-hee, has already passed away.

The sister, Lee Sook-hee, filed a suit with the Seoul Central District Court claiming that her father left shares in Samsung Life Insurance and Samsung Electronics for all of his children to inherit, not just Lee Kun-hee, said an official at law firm Yoon and Yang LLC.

The sister is demanding 2.23 million shares in Samsung Life Insurance and 10 preferred stocks in Samsung Electronics.

Like her brother, she claims that Chairman Lee secretly pocketed the inheritance upon the death of their father in 1987, even though the money was supposed to be allocated among the siblings.

Pundits say that if the brother and sister win their respective suits it will shake-up the power structure of Samsung Group and weaken Lee Kun-hee’s footing in the group.

Eventually, this could jeopardize the envisioned power succession of Samsung Group to Chairman Lee’s sons and daughters.

If Sook-hee and Maeng-hee win their legal cases, they would together possess a slightly larger share (16.27 percent) in Samsung Life Insurance than Lee Kun-hee, who would see his stake trimmed to 14.3 percent.

However, a Samsung official played down the possibility of other siblings joining the suit, adding that Lee Myung-hee, the fourth daughter of founding father Lee Byung-chull and the chairwoman of Shinsegae Group, had expressed no interest in doing so. Lee In-hee, the founder’s eldest daughter, said “all the inheritance matters were resolved when her father died.”