War of words on Roh’s apartment

War of words on Roh’s apartment 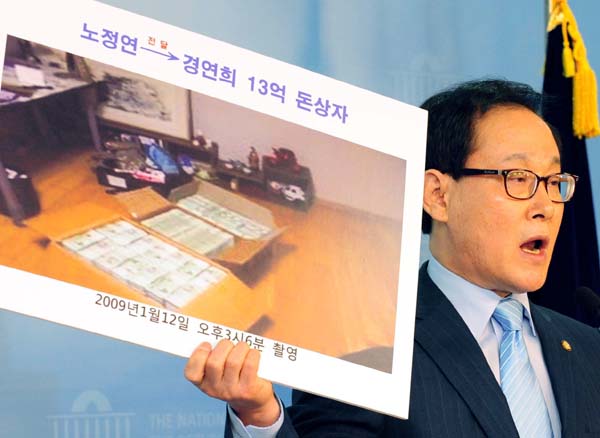 Representative Lee Jong-heuk of the Saenuri Party holds up documents allegedly about the sale of the apartment to Roh Jeong-yeon. [NEWSIS]


News that prosecutors may be reopening a corruption investigation into a real estate deal in New Jersey by the daughter of former president Roh Moo-hyun produced opposite reactions from the ruling and opposition camps.

The ruling party encouraged the move, while the opposition said it was a politically motivated development in advance of the April 11 general election.

On Monday, the Supreme Prosecutors’ Office advised Kyung Yeon-hee, 43, to come to Korea for questioning from the U.S. about a contract she signed in 2009 to sell her apartment in the upscale Hudson Club complex in New Jersey to Roh’s daughter. The office said it was responding to a request by a conservative group called the National Action Campaign for Freedom and Democracy in Korea.

In 2009, the prosecution attempted to prove that part of the payment for the apartment was from bribe money allegedly paid to Roh by Park Yeon-cha, former chairman of Busan-based shoemaker Taekwang Industrial, one of his wealthy supporters. The investigation into Roh and Park’s dealings was halted after Roh committed suicide on May 23, 2009.

Lee Jong-heuk, representative of the ruling Seanuri Party held a press conference yesterday at the National Assembly and produced an alleged copy of a contract between Roh’s daughter, Roh Jeong-yeon, and Kyung, written in English, and urged prosecutors to reveal details of the case that was sealed after Roh’s suicide.

Lee said the prosecutors must “summon everyone who is related to this case for questioning and investigate whether [Roh’s daughter] engaged in an illegal form of currency exchange to purchase the apartment.”

Meanwhile, Democratic United Party floor leader Kim Jin-pyo said yesterday that such an investigation by the prosecutors is “an illegal intervention in the [upcoming] election that is disguised in a cloak of political neutrality.

“Prosecutors said the decision to investigate the case was inevitable as there was a request from a conservative group, but the case had already been internally closed,” said Kim. “It’s an inhumane decision to reopen the case and investigate former president Roh’s family when it hasn’t even been three years since he was driven to commit suicide.”

Kim also warned prosecutors that “a public judgment would be inevitable if they don’t suspend such a politically targeted investigation.”