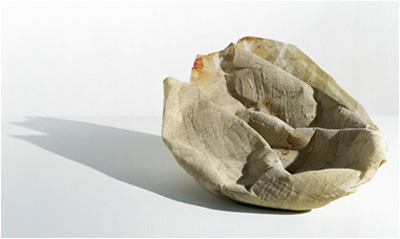 Eva Hesse’s untitled sculpture (1969) made of cheesecloth is part of the artist’s solo exhibition at the Kukje Gallery.By Abby Robinson


The new “Eva Hesse: Spectres and Studiowork” exhibition provides viewers with a glimpse into the life of the German-American artist who died an early death but left a significant legacy. Hesse (1936-1970) was a pioneer in her use of materials, known for including latex, fiberglass, wire mesh, cheesecloth and others items in her sculptures.

This exhibition at the Kukje Gallery in the art zone east of Gyeongbok Palace includes a group of small sculptures, all of which are being presented in Korea for the first time.

“Delicate and handmade, the shapes of these objects are undefined but ephemeral and evoke the vulnerability of the body while simultaneously pointing to the visceral work Hesse is famous for,” Kukje said in a press release.

“The ‘studioworks’ occupy a rare and wonderful place in Hesse’s life work, exhibiting traces of the artist’s touch as well as illustrating her constant experimentation.”

The show also includes 20 among the 48 paintings that Hesse made when she graduated from Yale University and moved to a new studio in New York in 1960. These oil paintings with distorted human figures in wild brush strokes have an expressionist air.

“These reveal an important part of her evolution as she moved away from abstraction to striking semi-figurative subjects that show her relentless exploration of the psychology of self,” Kukje said.

It also quoted Hesse as saying, “A lot of my sculptures could be called paintings.”