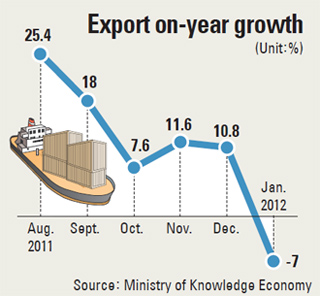 Korea’s export growth is expected to fall to around 5 percent in the first two months of this year mainly due to the global economic slowdown, the government and the central bank said yesterday.

In a policy coordination meeting between the Ministry of Strategy and Finance and the Bank of Korea, officials said persistent uncertainties facing advanced industrialized economies have hurt outbound shipments of locally made products.

The 5 percent growth forecast is much lower than the 19.3 percent on-year export gain tallied for the whole of 2011.

In January, exports contracted 7 percent on-year to $41.3 billion, but outbound shipments may have expanded at a double-digit rate this month.

The government expects the country to post a trade surplus for February from a deficit of $2 billion in the first month of this year.

“The global economy is recovering but only at a slow pace, and although this trend will help the country’s exports, its impact will be limited,” a government official said.

He said economic indicators for the U.S. economy are showing signs of improvement, which could help offset lingering problems facing euro zone countries. However, the U.S. economic recovery will be limited, while the European economy will continue to suffer from a recession.

The BOK and the Finance Ministry, however, said that despite external challenges, Korea’s exports should continue to grow this year as its companies expand their market presence in emerging economies where domestic demand is rising.

On the issue of Seoul’s foreign debt, policy makers said the overall amount has grown by a little over $100 billion since the 2008 global financial crisis, but short-term debt has fallen by $11.2 billion. Yonhap