As Korea wrestles with diversity, children to come first

As Korea wrestles with diversity, children to come first 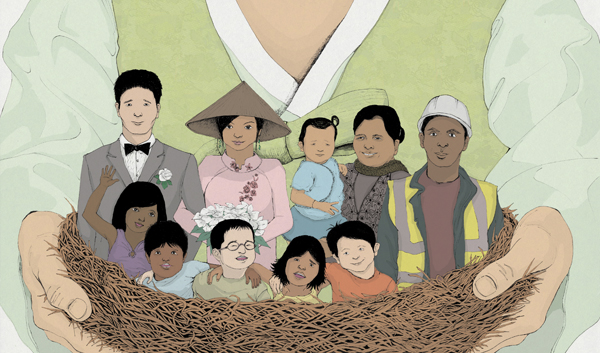 
Jasmine Lee, 35, originally from the Philippines, is arguably one of the most visible immigrants to Korea. Through active involvement in politics, advocacy and entertainment, she has become a symbol for immigrant participation in Korean society.

She is currently a potential candidate for the ruling Saenuri Party in the upcoming April general elections, her second foray into politics after a bid to get on the ruling party ticket ahead of the June 2010 local elections. 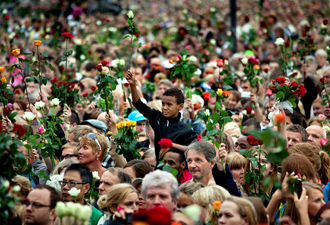 Prior to that, she organized the first volunteer group for migrant women, called Waterdrop, and has long been a spokesperson for migrant women. Last summer, she became one of the city’s first immigrant civil servants hired to oversee the immigrant and expatriate community. Later in the year, she starred as an immigrant mother in the hit movie “Wandeugi,” which described the obstacles for one multiethnic family in Korea.

Lee married her Korean husband in 1995 while attending medical school, and the couple subsequently moved here. Though tragedy struck the family in August 2010 when her husband died of a heart attack while rescuing his daughter from a mountain stream, Lee has continued to be involved in immigrant advocacy work.

Her motivation seems to stem from her own struggles as an immigrant woman in a society that continues to wrestle with diversity.

She recalls that it was particularly difficult to counter the negative images of immigrants that her children were picking up.

“I had to answer questions from my children, who would ask me if I had come here to make money or if I planned to run away after they had watched programs on multicultural families in Korea,” Lee told the Korea JoongAng Daily in a recent phone interview.

Despite these challenges, Lee has come to embody “multiculturalism” in Korea. Yet she represents just a fraction of the country’s immigrants, who regularly face the kinds of struggles she describes. With that in mind, multiculturalism policies will soon focus on assisting the children of immigrant couples.

Though the government has tried to paint multiculturalism in a positive light, questions about its policies have arisen with reports on the rise in the immigrant crime rate, the break-up of international marriages, and abuse of children from multiethnic families.

Those worries increased with the terrorist attacks in Norway last July as well as comments from European leaders about the failure of immigration policy. That was after Chancellor Angela Merkel of Germany declared in October 2010 that the concept of multiculturalism had “failed utterly.”

Shin Jae-ju, an instructor at Gangneung-Wonju National University in Gangwon told the Korea JoongAng Daily in a recent phone interview that many people in Korea were shocked at the news from Europe because multiculturalism has been presented as a solution to the nation’s low birth rate and rapid transition to an aging society.

But he added that it is too soon to conclude that multiculturalism has failed - either in Europe or Korea.

“Of course, mistakes may be made as new policies are initiated,” Shin said. “Those mistakes might make multiculturalism seem like a failure overall, but they could actually have a positive effect on other areas.”

He cited the rise in the number of marriage migrants as an example, and said that although the government has been struggling to find ways to verify that the women arriving here to marry Korean men are sincere about starting families, he thinks the somewhat “indiscreet” acceptance of these women has pushed the country to place greater focus on education and social welfare for their children.

“It’s still hard to say that Korea has a well-managed system of education for multicultural children, but I think the government is at least approaching the matter with an intense study of the related fields and is doing more with this than with other multiculturalism policies.”

Shin wrote in a recent report that the German case arose because its multiculturalism policies were initially focused more on immigration as a labor policy to boost the workforce instead of long-term residence or citizenship.

“It seems that integration into mainstream society is the key to making the least noise when talking about multiculturalism,” Shin said. “But how we get there is something we need to figure out on our own, since multiculturalism policy should reflect a country’s historical and cultural background.”

Experts say that it is clear that Korea cannot avoid an increase in the foreign population as more people travel internationally for education, work or leisure, and society needs to embrace the concepts of multiculturalism and multicultural families.

Although the government has developed a tentative three- to five-year plan that focuses on integrating the immigrant population, a long-term plan has not yet been created, according to Kim Ga-ro of the Ministry of Gender Equality and Family’s Multicultural Family Division.

“It’s hard to tell how many more immigrants the country will be seeing in the future,” said Kim Su-nam, of the Korea Immigration Service. “So it’s better to keep our options open.”

The government has, however, worked to clarify what constitutes a “multicultural family” in order to determine eligibility for government support.

“Korea separates foreign residents into these categories to sort out who to support,” Kim Ga-ro said. “It’s not right to support any foreigner just because they are foreign in this country. And people with families are more likely to help multiculturalism take root than individuals.”

As part of the government’s plan, which will be implemented starting next year, the Family Ministry will focus on assimilating children from the first generation of multiethnic families. Whereas the first plan, effective from 2010 to 2012, was centered around immigrant women, the new plan will focus on their children, Kim Ga-ro said. The details of the plan are still being discussed.

She said that support for multiethnic families will primarily come from local community offices and the list of services will include support for language and job training classes, medical expenses, and college tuition.

Jasmine Lee recalled that services such as these weren’t on the list when she first arrived 17 years ago.

She added that language is one of the most important skills for both marriage migrants and their children.

“You may think that it’s not necessary to learn the language, but it just makes your life much more convenient,” Lee said. “When you know the local language, you become less scared of that community and realize that there are many opportunities for integration.”

Lee Hak-chun, a professor at Dong-A University and the managing director of a center for multiethnic families in Busan, said that it’s particularly important to teach children the native language of their mothers in order to facilitate communication and instill pride in their heritage. It’s also a way to avoid social upheaval, he said.

“It’s key to prevent these children from going astray because they are unable to communicate with their parents,” Lee said, warning that the children are also at risk of becoming embarrassed of their foreign parent or heritage.

“These children tend not to be proud of their parents’ origins because they get teased by their fellow students,” Lee said. “In the process, they start to think that society has alienated them, and that in turn makes them reject Korean society.”

However, he disagrees with the idea that the children of multiethnic families could become any more of a threat to society than a child with two native Korean parents.

With the attention given to multiculturalism, Yoon Jeong-hwan of the Migrant Community Service Center in Ansan, Gyeonggi, said that it is necessary to focus more on its positive aspects.

“I can’t deny that native Koreans will face hardships as they accept the idea of multiculturalism, but I’m sure that it will benefit them - for starters, they won’t need to travel far because the immigrant population can satiate the desire for global experience.”

Jasmine Lee said she hopes for a day when the term “multicultural family” disappears.

“Many services [for multiethnic families] will be minimized or eventually disappear in the future because I think it’s a popular trend to make policies to help multicultural families integrate,” Lee said. “But I hope that the concept of multiculturalism becomes more common so that future generations will not understand why people would ever have called certain families ‘multicultural families.’?”