Players from the 16 K-League clubs pose for a photo during the 2012 K-League kickoff press conference at the Grand Hilton Hotel in Seoul on Monday. By Kim Min-gyu


Last year, the Korea Professional Football League (K-League) endured a painful and embarrassing season as a match-fixing scandal swept through the league and made headlines around the world, with dozens of active and former players arrested or indicted.

In response, Commissioner Chung Mong-kyu has overhauled the league’s format for the 2012 season, hoping to bury the past and create a new image for the league. 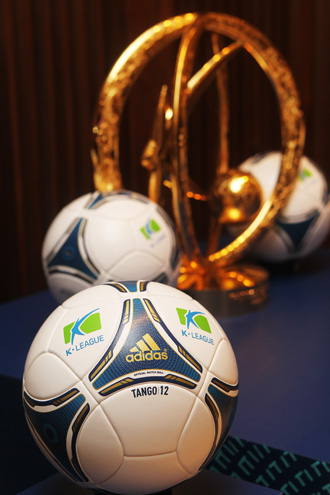 The Adidas Tango 12 has been unveiled as the official ball of the 2012 K-League season. [YONHAP]

Starting this Saturday, the new-look clubs will begin their 10-month journey in the K-League’s 30th season. The 16 teams will compete under the slogan “passionate playground 352.”

The number 352 refers to the total number of matches played in the overhauled format for 2012, which will see the largest number of games in the league’s history.

The league has abolished the post-season playoff format as well as the K-League Cup competition, meaning the season champion will be determined by regular-season records.

The K-League Cup, which was won by Ulsan Hyundai FC last year, was canceled because it was riddled with corruption.

It was reported that most players involved in match-fixing purposefully made mistakes during the League Cup because it draws little fanfare and there is minimal prestige behind the trophy.

Since cup matches were held on weekdays, teams often sent reserve players for the competition, while giving a rest to top performers for the regular season matches on the weekends.

The gambling brokers took advantage of this situation and bribed players to deliberately make mistakes that would eventually alter the results of the matches.

In hopes of eliminating corruption entirely, the league has also adopted a new format called a “split system” for this season only. A similar system is currently used in the Scottish Premier League.

The split system will eventually become a promotion-relegation system in 2013, similar to the English Premier League.

Last month, the K-League board of directors passed a proposal trimming the league to 14 teams in 2013, with two teams relegated at the end of the season and a playoff between the 12th-placed team in the first division and the winner of second division deciding the 14th spot.

From 2014, a similar system will trim the league down to 12 teams, after which a full promotion-relegation system will be implemented with two teams relegated to the second division every season.

For this season, the 16 clubs will be split into two groups based on their records after 30 matches. The teams will then have 14 matches more within their divided group.

The winner will be determined only from the group with the top eight teams, while the two worst clubs in the worse group will be relegated to the second division for the 2013 season.

Even if teams in the bottom group collect more points by the end of the season, the final rank will not be changed. The only teams facing relegation will be those placed in the bottom half of the league after 30 matches.

“We believe the split system will keep things interesting until the end and teams will stay competitive,” league commissioner Chung said at the media day event on Monday. “Also, we’ve made extra efforts to ensure fair and transparent officiating. Our games will be refereed in an acceptable and reasonable fashion.”

With the new league format in place, teams’ goals will vary greatly. For big clubs with quality squads that expect to be included in the top group after 30 matches, their goal will be winning the K-League title. But for smaller clubs, making the top group and avoiding relegation will be a new minimum standard.

Since each team will play 44 games, up 14 from last season, it will be critical stay in top form until the final day.

For Jeonbuk Hyundai Motors, Ulsan Hyundai, Seongnam Ilhwa Chunma and Pohang Steelers, it won’t be an easy task since these clubs also have to compete in the AFC Champions League.

At the media day event on Monday, half of the 16 K-League coaches picked the Suwon Samsung Bluewings as the favorite to win the league because the club failed to qualify for the AFC Champions League.

The Bluewings, who finished fourth last season, have strengthened the squad at both ends of the pitch. While signing Aussie defender Eddy Bosnar and former Gangwon defender Kwak Gwang-sun, the team also brought Montenegrin striker Dzenan Radoncic and Cho Dong-geon from Seongnam as well as winger Seo Jung-jin from Jeonbuk.

Reigning champion Jeonbuk has kept the core of the championship squad that includes last season’s MVP Lee Dong-gook, who led the league in assists (15) and finished second in scoring (16).

The team added Chile international Hugo Droguett and midfielder Kim Jung-woo, but the real task for this team will be coping with the departure of coach Choi Kang-hee, who is now at the helm of the national football team.

Pohang, who was last year’s runner-up in the regular season, lost four regular members due to military service and transfers, but brought in new faces including former Inter Milan midfielder Ianis Zicu of Romania.

FC Seoul, the 2010 champion, hasn’t added big players to its squad, but will instead look to maximize the team’s performance, according to coach Choi Yong-soo.

Ulsan and Seongnam are expected to be two of the most formidable teams this season, having upgraded their squads efficiently in the off season.

Ulsan, who fell short against Jeonbuk in the championship series after reaching the stage as the playoffs’ sixth seed, acquired wingers Lee Keun-ho and Kim Seung-yong, stars from Japan’s J-League, and also former Japanese national team member Akihiro Ienaga, who will be joining on loan from Spanish club RCD Mallorca. These three players will likely contribute to the team’s firepower.

Seongnam has brought in former Gyeongnam midfielder Yoon Bitgaram and left-footed striker Han Sang-wun from Busan. The team has a history of winning the title in six-year intervals, and coincidently this is the sixth year since its last trophy. Coach Shin Tae-yong said the team is hoping for two titles - from the K-League and AFC Champions League.

Football pundits predict these six clubs will clinch spots in the top group while the remaining 10 clubs compete to join the dominant teams and avoid relegation.

Among these clubs, Daegu FC should be exciting to watch in 2013 as it has entirely transformed itself with Brazilian-style “samba football.”

Another team to watch is Incheon United, who brought in two Korean stars from the 2002 World Cup: Kim Nam-il and Seol Ki-hyeon.