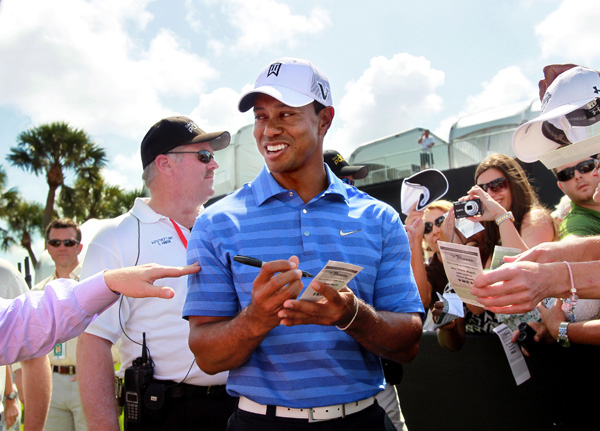 Tiger Woods signs autographs during a practice round for the Honda Classic golf tournament in Palm Beach Gardens, Florida, on Tuesday. [AP/YONHAP]


PALM BEACH GARDENS, Florida - Tiger Woods’ agent lashed out Tuesday against Hank Haney’s book, saying his “armchair psychology’’ about Woods was “ridiculous’’ and that it was clear the former swing coach only cares about self-promotion.

Haney’s book about his six years as Woods’ coach is titled, “The Big Miss.’’ It is to go on sale March 27, a week before the Masters.

Golf Digest began releasing small excerpts Tuesday on its tablet applications and on its Web site. Haney’s book was written with help from Jaime Diaz, a senior writer at the magazine who has covered Woods more extensively than anyone over the years.

In one of the excerpts, Haney said his job became more difficult in 2007, when Woods had 12 majors and was getting closer to the record 18 won by Jack Nicklaus.

“There was more urgency and less fun. .?.?. He never mentioned Nicklaus’ record, but it started to weigh more heavily at every major,’’ the excerpt said. “And Tiger’s actions indicated he believed he had less time to do it than everyone thought.’’

Haney said the objective of revamping his swing was to preserve his left knee.

He also said Woods was seriously considering becoming a Navy SEAL. Woods’ father, Earl, was a green beret in the Army who did two tours during the Vietnam War.

“I didn’t know how he’d go about it, but when he talked about it, it was clear he had a plan,’’ Haney writes in the excerpt. “I thought, ‘Wow, here is Tiger Woods, greatest athlete on the planet, maybe the greatest athlete ever, right in the middle of his prime, basically ready to leave it all behind for a military life.’?’’

Mark Steinberg, Woods’ agent at Excel Sports Management, said in a statement that excerpts show Haney’s claim of the book being about golf is “clearly false.’’

“His armchair psychology about Tiger, on matters he admits they didn’t even discuss, is ridiculous,’’ Steinberg said.

“Because of his father, it’s no secret that Tiger has always had high respect for the military, so for Haney to twist that admiration into something negative is disrespectful.’’

Woods is playing the next two weeks in south Florida, at the Honda Classic and Cadillac Championship at Doral, as he prepares for the Masters. Woods has not won at Augusta National since 2005.