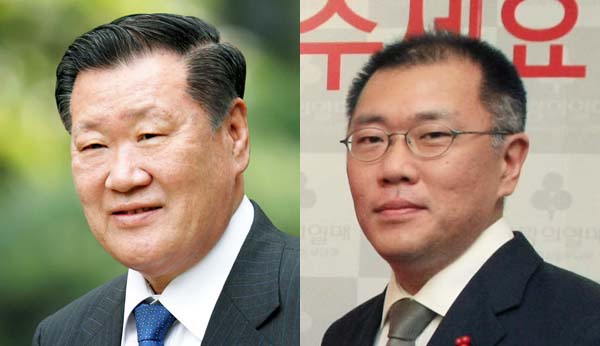 
Chung Eui-seon, vice chairman of Hyundai Motor, was named standing director of Hyundai Steel at a recent board meeting. The move is seen as part of efforts to exercise tighter control over the steel maker.

Eui-seon is the only son of the group’s billionaire chairman Chung Mong-Koo, whose father founded Hyundai. The youngest Chung’s personal net wealth was estimated at $2.1 billion last March, according to Forbes.

He has served as a standing director on numerous companies, most of them related to the automobile industry, including Hyundai Motor, Kia Motors, Hyundai Mobis, Hyundai AutoEver and Hyundai NGV. However, this is the first time he has taken the post at a steel manufacturing arm.

Hyundai Steel has struggled recently as a result of the country’s shipbuilding industry, a major consumer of steel products, suffering from the global economic downturn. It posted a loss in the third quarter of last year as rising iron ore prices, coupled with the declining value of the local currency, ate into its bottom line.

Now the group seems to be taking its travails seriously.

“Chung has been appointed as the de facto savior of Hyundai Steel,” said one industry insider.

“The move marks a rapid response to the deteriorating business environment the company is mired in,” said a Hyundai Steel official.

The domestic steel industry is still reeling from higher raw material prices, particularly iron ore, and an oversupply of steel products around the world. Although Hyundai Steel fared better than many of its rivals, it performed worse than expected.

Europe’s ongoing debt crisis has dealt major steel companies around the world a heavy blow, and the Hyundai unit is no exception. It is expected to see its performance significantly worsen this year.

The recent reshuffle was also aimed at maximizing the synergistic effect between the group’s auto manufacturing units and its steel business.

“Chung’s appointment partly reflects the growing importance of materials like steel in the quality of automobiles,” the Hyundai Steel official said.

This is not the first time that Chung has been called on to save the day. He was named president and CEO of Kia Motors, Hyundai Motor’s affiliate, back in 2005 when it was in poor shape. Chung, who was 36 at the time, was tasked with turning around the cash-bleeding subsidiary, a job he succeeded in completing within four years by revamping the way its models were designed.

To help him, Chung recruited Peter Schreyer, who was involved in major projects for German automakers such as the development of the Audi TT. Schreyer currently heads up Kia’s design team. Based on this success, Kia is now considered a formidable threat to Hyundai Motor, its affiliate.

Now all eyes are on whether Chung can apply the same principles to reprise his success in a different business sector.

“This appointment is partly a test of his ability,” said a senior official at Hyundai Motor Group.

Meanwhile, Chairman Chung Mong-koo was named standing director of Hyundai Engineering and Construction at a board meeting on Tuesday. This is related to the group’s strategy of seeking growth from three main businesses areas - automobiles, construction and steel - by speeding up decision-making at the construction arm.

When Hyundai Motor Group acquired the firm in March 2011, he said he would devote all of his energies to developing it into a global company.

Ugly apples and potato pastries as farmers get a helping hand