Posco gets president’s blessing in Java

Posco gets president’s blessing in Java 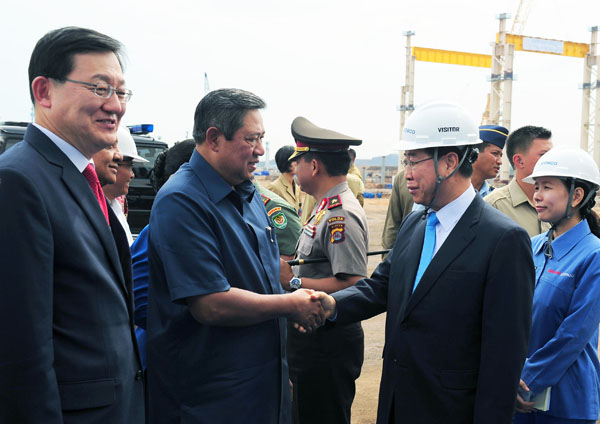 Hong is visiting the country to meet senior officials there and discuss forms of industrial and economic cooperation between the two sides, according to the ministry.

It was the president’s first visit to the construction site, Posco said.

Posco CEO Chung Joon-yang greeted the minister and president at the site. He expressed gratitude to both for their visit.

“By completing an integrated steel mill in Indonesia, Posco will contribute to economic and industrial cooperation between the two countries,” Chung said.

An integrated steel mill will be able to melt iron ore and remove impurities, then turn the metallic stain into steel plates. It will also shape the steel plates into various forms by pressurizing them at high temperatures.

Posco plans to make the Cilegon plant a strategic bridgehead to penetrate the Southeast Asian market and thus materialize its so-called Vision 2020 plan, under which it aims to reach total sales of 200 trillion won ($179 billion) within eight years as a global total material group.

The first phase of the mill is slated for completion in December 2013. The facility will become Posco’s third integrated steel mill after others in Pohang, North Gyeongsang and Gwangyang, South Jeolla.

When completed, the plant will be able to produce 1.5 million tons of slab and thick steel plates each year. One million tons of the slab - or half-finished steel plates - produced in Java will be sold to the largest Indonesian state-run steel maker Krakatau Steel for rolling, while the remaining 0.5 million tons will be exported to other countries in the region.

The total annual capacity of the plant is planned to be expanded to six million tons at a later date. Meanwhile, construction is proceeding faster than any of Posco’s other overseas projects, including those in India and Brazil.