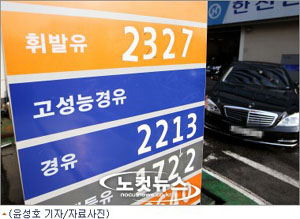 The government will consider reducing taxes on oil products if the international price of oil remains above the $130 per barrel mark for five consecutive days, Korea’s top policy maker said yesterday. But it is also considering different types of measures to directly help poorer families affected by high oil prices, rather than allowing rich people to benefit from a blanket reduction in taxes.

“The international price of oil has been surging, and because of this, many working-class people who need automobiles to make a living will be placed under a heavy burden,” Minister of Strategy and Finance Bahk Jae-wan told reporters yesterday at the Government Complex in Gwacheon, Gyeonggi.

The conference was held to talk about Bahk’s recent trip to Mexico City to participate in a meeting of finance ministers and central bank governors from the Group of 20.

“[As an alternative to lowering oil taxes], what we’re also considering doing is selectively supporting those who are faced with more difficulty [in dealing with high oil prices],” Bahk said.

The minister added that if he were to choose between the two - oil tax cuts or selective support to low income families - he would go with the latter “as it would have a bigger impact.”

“Helping people who drive big cars is not on the government’s priority list,” he said. The ministry said later it is studying ways to give selective relief to poorer citizens.

The minister said Korea’s oil taxes account for 47 percent of consumer gasoline prices, which is lower than the OECD average of 53 percent. When the government lowered oil taxes in 2008, when the international oil price went above $140, the retail gasoline price didn’t go down as much as expected, he said.

The price of oil products, including gasoline and diesel, have skyrocketed due to rising tensions in the Middle East. Dubai crude oil, which accounts for over 80 percent of Korea’s oil imports, was traded at $121.81 per barrel Tuesday.

Bahk said his fellow G-20 finance ministers and central bank governors in Mexico City were not able to reach an agreement on expanding International Monetary Fund resources to help the ailing euro zone recover from its debt crises. But, he said, “The economic leaders all agreed on the need for an urgent IMF resource expansion.”

“I expect there will be some solution available and presented before the G-20 summit in June regarding the euro zone crisis,” Bahk said.