President to rebuild his residence for more safety

President to rebuild his residence for more safety 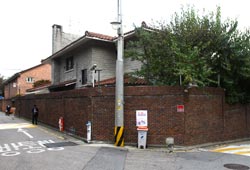 President Lee Myung-bak plans to have his private house reconstructed to boost the building’s security features so that it can be used as his residence after he leaves office early next year, an official said Wednesday.

Lee has said he will use his Nonhyun-dong home in southern Seoul as his retirement residence after a project to build a new house on the outskirts of the city fell apart last year following revelations of irregularities, including the use of Lee’s son’s name to purchase the site.

Aides have said that Lee initially pushed for the new retirement home because his existing Nonhyun-dong house has holes in its security and it was also too expensive and too difficult to purchase surrounding land to build facilities for security personnel.

“The private residence is run-down as it was built in the 1980s, and we have security difficulties there as buildings have gone up around it,” Park Jeong-ha, presidential spokesman, told reporters.

A report has been filed with a local office to tear down the house, and reconstruction will begin after administrative approval comes around in mid-March, officials said.

The presidential office has also purchased a site for security personnel facilities further away from Lee’s home, the spokesman said. Nearer plots were too expensive. Meanwhile, prosecutors said yesterday that they have found evidence that Representative Lee Sang-deuk, the president’s elder brother or his associate have been taking bribes. Yonhap