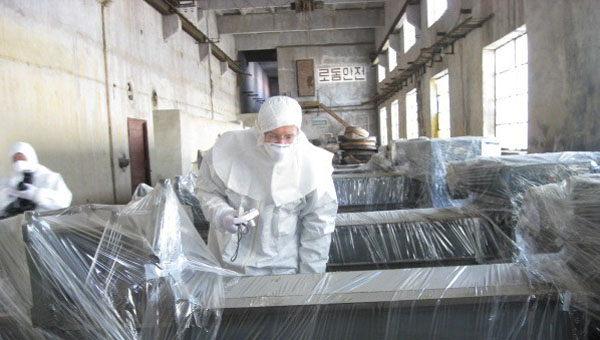 A room at the North Korean nuclear facility in Yongbyon. Provided by Stanford University

North Korea has promised to suspend uranium enrichment at its facility in Yongbyon for the first time in exchange for 300,000 tons of food aid from the United States, diplomatic sources told the JoongAng Ilbo.

The U.S. and North Korea were expected to simultaneously announce the agreement, reached at a third-round of bilateral talks in Beijing, at 11 p.m. last night Korea Standard Time.

It’s rare for Washington and Pyongyang to release simultaneous statements, suggesting that the way has been paved for resumption of the six-party talks on the nuclear disarmament of North Korea, which have been in limbo for three years and two months.

In return for the aid, North Korea also promised a moratorium on provocative acts such as missile and nuclear tests, sources said. 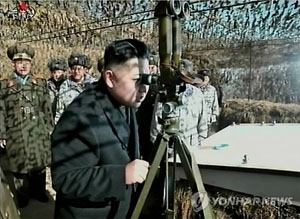 South Korea’s Ministry of Foreign Affairs and Trade also yesterday prepared to issue a statement, the sources said, welcoming the suspension of the uranium enrichment at Yongbyon and expressing hopes for the resumption of the six-party talks, which involve South and North Korea, the U.S., China, Japan and Russia.

According to sources, North Korea will suspend its uranium enrichment program at Yongbyon and allow in inspectors from the International Atomic Energy Agency. The United States promised to offer roughly 300,000 tons of so-called nutritional aid.

Last December, just before the death of North Korean leader Kim Jong-il, the two countries reportedly came close to reaching an agreement for 240,000 tons of nutritional aid to be given to the North.

At recent talks in Beijing, media in the South said the North requested additional aid, citing former U.S. President George W. Bush’s promise of 500,000 tons of food aid. Pyongyang reportedly said it had only received 170,000 tons of the promised amount and wanted the rest.

South Korea and Washington have said they wouldn’t return to the six-party talks without tangible evidence of sincerity from the North’s side, such as suspension of uranium enrichment and a moratorium on missile and nuclear tests.

As a further sign of improved relations between Washington and Pyongyang, Ri Yong-ho, the North’s senior representative at the six-party talks, will pay a visit to the U.S., a diplomatic source told the JoongAng Ilbo yesterday.