Pitcher to be queried on match-fixing tomorrow

Pitcher to be queried on match-fixing tomorrow 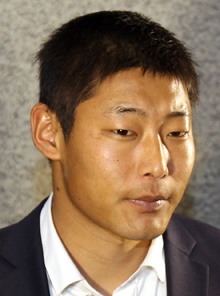 An active professional baseball pitcher who is suspected of involvement in match-fixing has denied the allegations.

Park Hyun-jun, 26, the ace pitcher for the Seoul LG Twins who has been participating in the team’s spring training in Okinawa, Japan, returned to Korea yesterday.

“I did not participate in the match-fixing schemes,” Park told Korean media with a smile at an arrival gate of Incheon International Airport.

“I believe that the truth will come out soon.”

Park left the airport in a hurry with an official of the Twins, avoiding reporters’ questions. Park will appear for questioning at the Daegu Prosecutors’ Office tomorrow.

The 2011 season All-Star pitcher Park is currently suspected of receiving 3 million won ($2,660) per game in exchange for walking batters in the first inning of games.

The investigation into the match-fixing scheme in the country’s most popular sport is accelerating.

Prosecutors decided to summon Park two days after arresting his teammate Kim Seong-hyun, 23, for match-fixing. The Daegu District Prosecutors’ Office said on Tuesday that Kim admitted that he was involved in a match-fixing scheme twice during the 2011 regular season.  The prosecution filed a warrant yesterday to detain Kim for further questioning.

During questioning, Kim testified that he intentionally walked batters in the first innings of two separate games and received 10 million won ($8,880) in cash in return.

The prosecution said that Kim took part in match-fixing in games versus the Daegu Samsung Lions (April 24) and the Seoul LG Twins (May 14) when he played for the Seoul Nexen Heroes. Kim was traded to the Twins on July 31. The prosecutors arrested the pitcher on Tuesday at a spring training camp in Jinju, South Gyeongsang, after a testimony about his involvement from a 26-year-old match-fixing broker.