A popular political podcast revealed on Tuesday that the husband of former Grand National Party mayoral candidate Na Kyung-won, who lost the by-elections to Mayor Park Won-soon in October 2011, requested a prosecutor to indict netizens that slandered his wife back in 2005.

According to a broadcast from “Naneun Ggomsuda” (I’m a Petty-Minded Creep), Park Eun-jeong, 40, a prosecutor currently with the Bucheon branch of the Incheon District Prosecutor’s Office, confessed in the Seoul Central District Prosecutors’ Office that he had received a request from Judge Kim Jae-ho, husband of Na Kyung-won, asking the Seoul Western District Court to prosecute a netizen who had written slanderous posts about Na on the Internet in 2005.

Park, who was in charge of investigating the netizen who posted about Na’s attendance at an event for Japan’s Self-Defense Forces, allegedly received a call from Kim. 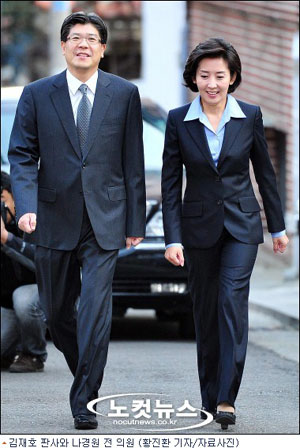 The issue first surfaced in October last year. In the middle of the heated campaign leading to the mayoral elections, “Naneun Ggomsuda” said, “Candidate Na’s husband, Judge Kim, has requested prosecution of netizens that slandered Na.”

Na in turn sued the reporter, Choo Chin-woo, 39, who had been a panelist on the show, and made the allegations about Kim. At that time, Choo did not reveal the prosecutor’s name.

In the October 2011 podcast, Choo stated that Judge Kim requested prosecution of netizens that wrote posts belatedly lambasting Na for attending an event at the Japanese Embassy in 2004, when she was a first-term lawmaker, celebrating the 50th anniversary foundation of Japan’s Self-Defense Forces. Na again came under attack during the electoral campaign once the issue came to light.

“Judge Kim requested action on a case related to his wife, even though it was unrelated to his duties,” the podcast on Tuesday further stated. “If the facts of this incident are confirmed, the obvious violation of the judiciary ethic code is grounds for disciplinary action.”

But the Supreme Court expressed yesterday, “Currently, it is only ‘Naneun Ggomsuda’ that alleges Judge Kim requested prosecution so no truth has been confirmed.”

“If the district court where Judge Kim used to work confirms the facts, the Supreme Court may decide if disciplinary action is needed, but there has been no precedent until now for someone requesting [to press charges] for a family member like this, so it is unclear what will happen afterwards,” the Supreme Court further said.

But a police spokesman said yesterday, “We are still reviewing whether we will investigate Prosecutor Park, but we might summon him,” and that the police will “reach a decision with time.”