Korea advances to final round of WC qualifiers

Korea advances to final round of WC qualifiers 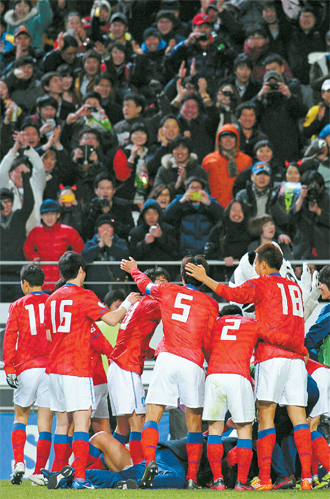 Korean national football team members celebrate after scoring a goal against Kuwait during their third-round Asian qualifiers for the 2014 FIFA World Cup at Seoul World Cup Stadium on Wednesday. [NEWSIS]

Korea advanced to the final round of the Asian qualifiers for the 2014 FIFA World Cup on Wednesday, but coach Choi Kang-hee said the team needs to play better in the upcoming matches.

In front of 46,500 fans at Seoul World Cup Stadium, the Taegeuk Warriors defeated Kuwait 2-0 thanks to second-half goals from Lee Dong-gook and Lee Keun-ho.

The game wasn’t a smooth one for Korea as the team almost gave up the opening goal to Kuwait forward Yousef Nasser, who hit the crossbar with a midrange strike in the 47th minute.

But once again reigning K-League MVP Lee Dong-gook broke the scoreless deadlock in the 65th minute and turned the tide for Korea with his left foot after converting a cross from Lee Keun-ho.

With the victory, Korea has secured one of the 10 slots in the next round of the Asian qualifiers after finishing atop Group B with 13 points with four wins, one draw and one loss.

On Wednesday, Korea could have faced elimination from the World Cup if it had lost to Kuwait and Lebanon won or drew against the winless United Arab Emirates.

But in the end, Korea would have advanced regardless of the outcome against Kuwait, as the UAE upset Lebanon 4-2.

Despite the loss, Lebanon still advances to the fourth round of qualification because Korea beat Kuwait, who is now eliminated and will not compete in Brazil.

Choi, in just his second match as national team coach after facing Uzbekistan in a friendly on Saturday, said the team didn’t show its best, allowing Kuwait to control the game in the beginning.

“I told the players that Kuwait will play aggressive from the beginning, but our defenders moved back too much which left space in the midfield,” Choi said at post-match press conference. 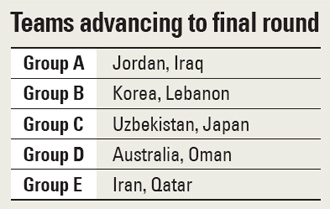 “However, we were able to take advantage of the opponent after they started to lose concentration from the 60th minute.”

The 53-year-old coach said the next round of qualifiers will not be easy.

“It’s going to be a really tough road,” Choi said at the post-match press conference. “For this qualifier, we prepared for 10 days, but in the future, we’re not going to be given that much time, so I have a lot to consider.”

The final round of the Asian qualifiers starts in June and will go through 2013. A total of 10 teams who finished in the top two of their respective groups will be divided into two groups and will play in a home-and-away system.

The top two teams from each group will earn a spot in the World Cup while the third-placed teams will have to square off against each other and then play against the fifth-placed team from the South American qualifiers to play in Brazil.

The group draw will be held at AFC headquarters in Kuala Lumpur, Malaysia, on March 9 and the seeds will be assigned based on March FIFA World Rankings.

Korea, ranked 34th in February, is likely to be a top seed along with Australia (22nd) since Japan (30th) is expected to plunge in the new FIFA rankings - which will be released on Wednesday - after losing 1-0 to Uzbekistan.

If Korea is a top seed it would avoid playing against Australia and would play its first final-round qualifier at home.

The other nine countries advancing to the final round of the Asian qualifiers include Iraq, Jordan, Lebanon, Japan, Uzbekistan, Australia, Oman, Iran and Qatar.

In 2010, South Korea, North Korea, Japan and Australia represented Asia in the World Cup. North Korea finished in third place in Group C and will not compete in Brazil.