Actor steps in to save ‘Dr. Zhivago’

Actor steps in to save ‘Dr. Zhivago’ 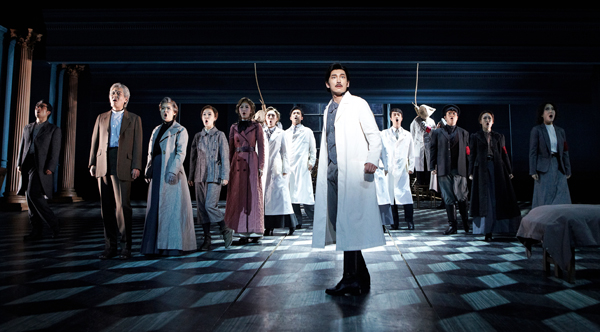 Jo Seung-woo, who rose to fame in “Jekyll and Hyde,” stars in the musical “Doctor Zhivago,” currently running at the Charlotte Theater in Jamsil, southwestern Seoul. Provided by OD Musical Company


Just a over month after accepting the lead role in “Doctor Zhivago,” its star Jo Seung-woo is proving he is a capable leading man. But whether he can continue to carry the show above a weak script is another matter.

Jo made his debut in the role on Feb. 14, following the sudden departure in January of actor Ju Ji-hoon from the 2006 hit drama series “The Palace.”

This musical, based on Boris Pasternak’s 20th-century novel of the same title, is being performed in Korea for the first time. It is running now through June 3 at the Charlotte Theater in Jamsil, southwestern Seoul.

The musical was produced through a collaboration between Korean, Australian and American companies and it premiered in Australia in February 2011, though an earlier version premiered in the U.S. in 2006.

Ju left the cast just over two weeks before the musical was set to open on Jan. 27 claiming vocal cord injuries.

The creative team was here earlier this year to put the performance together for the Korean cast.

Jo, who rose to stardom in “Jekyll and Hyde,” which ended its most recent run last year, was a charismatic and romantic leading man. It was hard to believe that he was able to fit into the role so easily after only a month of rehearsal.

He shows empathy and urgency while treating his patients while also demonstrating his determination as he expresses the character’s poetic ambitions.

In his scenes with Lara, who becomes the love of Zhivago’s life, Jo conveys the passion of a forbidden love. The yearning gaze that he bestowed upon Lara was so real at one point that it was easy to forget that the character is married.

Though Jo’s performance carries the show, fans of the book may still find themselves disappointed with this adaptation. The script doesn’t allow for enough character development, leaving many of the scenes feeling empty.

Whereas the most famous adaptation of the book, the 1965 film produced by David Lean and featuring Egyptian actor Omar Sharif as Zhivago and English actress Julie Christie as Lara, achieved a good balance between historical detail and romance, this version doesn’t fully explain how Zhivago and Lara come to love one another after just a couple of brief interactions.

Ultimately, the musical survives thanks to the appearance of the talented actor, but if it is to succeed with a different cast, the creative team will have to work more on developing the relationship between the two leads.

The musical is set to be presented in London’s West End next year, but no further details have been announced.