Manscaping to exfoliating: Men a cosmetics gold mine

Manscaping to exfoliating: Men a cosmetics gold mine 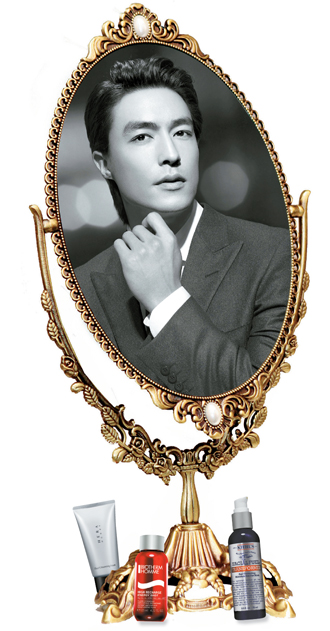 A love for makeup and skincare products almost got Lee Byeong-chul institutionalized at a mental hospital 15 years ago.

The 28-year-old male beauty blogger and freelance cosmetics consultant said that upon discovering his “unnatural” attachment to makeup and skincare, his middle school homeroom teacher called for a meeting with his father one day.

“The teacher told my father that he should seek mental help for me at an institution because I was always looking at cosmetics ads and testing out new products at school,” said Lee, sitting amidst boxes of brand new grooming products in his living room in Uijeongbu, Gyeonggi.

“I ended up going to a mental institution for an evaluation. The psychologist said I was normal and I returned to school - although the ridicule I received from teachers and bullying by male classmates never stopped.”

Lee, who goes by the nickname Little Prince, is now one of the most popular male beauty bloggers in Korea and has written a book on skincare and makeup in addition to being featured in numerous articles and TV shows.

“Back 10 or 15 years ago when I was young, it was almost a sin for guys to care about their skin and the overall appearance of their face, but now it has become the norm,” he said.

“I think we live in a great time now, when as males, expressing ourselves through makeup and taking care of our skin is no longer seen as a weird, abnormal thing.”

Looking at recent statistics on the domestic male grooming market, it is quite possible that the morning beauty routine of Lee’s bullying classmates might now be more similar to the blogger’s than they would care to confess.

According to a survey by global market research company Euromonitor International, Korea is the largest market in the world for male skincare products, accounting for 18 percent of the global pie. Korean men spent 284.6 million euros ($382.4 million) in 2010 on skincare and grooming products, followed by Chinese men in second place, spending 228.7 million euros during the same year and Japanese men in third with 181.1 million euros.

Korea’s male grooming market has grown steadily, recording an average growth of 7 percent each year since the mid-2000s, according to cosmetics industry estimates.

“In the past, given Korea’s Confucian background, it was almost taboo for them to express interest in grooming or beauty products,” said Chang Byung-soo, a cosmetology professor at Hanseo University. 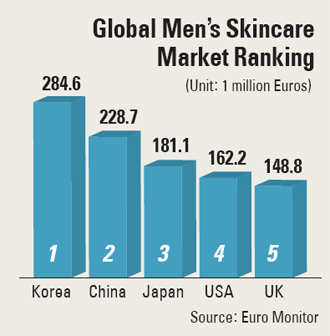 “But recently, with the popularity of the Korean Wave along with a society that has become more and more obsessed with exterior beauty, men are finding it a necessity to take care of themselves and their image to get ahead in both their personal and professional lives.” With this blossoming market, skincare centers, spas and cosmetics shops for men have sprung up across the country. Korea’s biggest cosmetics company AmorePacific opened a store for men, Manstudio, in northern Seoul’s hip Hongdae area in 2010, providing AmorePacific’s male skincare and cosmetics products as well as one-on-one skincare consultations and beauty classes.

“Since we opened, Manstudio has been seeing around 20 percent annual growth. Last August, we even opened a second branch in Suwon [in Gyeonggi],” said Ok Eun-jae, a manager at Manstudio, adding that on weekends around 1,000 customers visit the shop.

“Men like their shopping to be simple and one-stop. Shops like Manstudio offer them everything they need without the fuss of going around to different places and that, I think, is the secret to our success,” added Ok.

Besides the sheer volume of the male cosmetics industry here, it seems Korean men are now comfortable enough with skincare and cosmetics to demand a wider range of skincare products.

According to Jeon Bin-na, public relations manager for Biotherm Homme, a men’s skincare line of French group L’Oreal, Korean men have graduated from humble bar soaps and aftershaves to seek more diverse, advanced products. Sales from Biotherm’s men’s line now accounts for up to 35 percent of the brand’s total.

“Korean men in particular, are really adventurous when it comes to buying cosmetics and skincare products. For example our ‘whitening’ line was launched first in Korea, before anywhere else,” said Jeon.

She added that the line of brightening serums and moisturizers were most popular with men in the military.

“Men fulfilling mandatory military service really like the whitening line because they get tanned during training and want brighter, more luxurious-looking skin when they get out.”

Upon launching a new BB (blemish balm) cream for men, Richard Sawyer, the education director for Lab Series, a male skincare brand by Estee Lauder, revealed that the brand’s sales in Korea are the highest among countries worldwide and that compared to male consumers in other regions, Korean men are more “forward-looking and open” to cosmetics and skincare.

Ok, of Manstudio, agrees that Korean men now have a lot of knowledge about skincare and want diverse product lines to meet their skincare woes.

“The fact is, Korean men are spending more on skincare and they want more than lotions and toners. Our most popular products include tinted BB creams, masks and anti-aging serums and customers are even asking about light makeup products for their eyebrows and lips.”

Having good skin not just for the young

The grooming trend may have started with younger Korean men, but nowadays those in their 40s and 50s are just as concerned, if not more so, about their skin and face as their younger counterparts.

Sohn Tae-jin, a 45-year-old sales manager at a local firm, confessed that he uses six to seven skincare and cosmetics products every morning, including a whitening serum and BB cream.

“When I was in my 30s, I only used one moisturizer in the morning. I guess it was a more conservative time in Korea,” said Sohn, adding that BB creams are his favorite invention of the past decade.

“But now, I can’t imagine my life without BB cream! I just look so much more put together when I use it and feel more confident with it on, especially when I meet clients.”

“While other licensed men’s magazines here including GQ Korea have younger readers, the Korean market for male fashion and grooming products has now matured enough to accommodate magazines like Leon,” said Won Jong-myung, an editor at Leon Korea.

“It’s a great time for Korean men, especially older men who in the past have shied away from grooming due to the conservative attitude on male grooming here.

“I think they have come to realize that grooming and taking care of their appearance translates into smart self-promotion and even success in their respective jobs.”