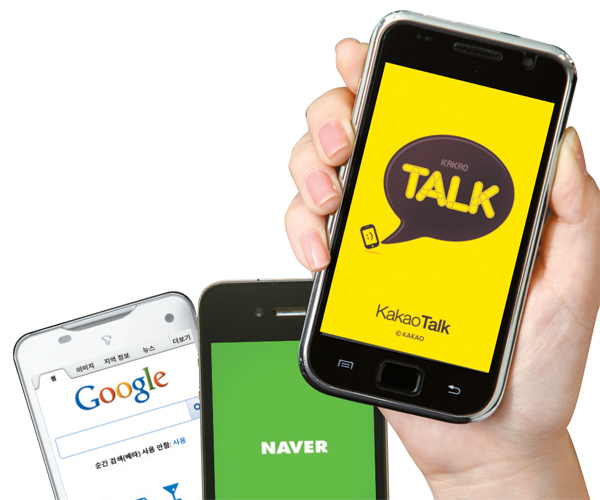 Naver has long reigned as the king of Korea’s Internet business, but it is not the most popular tool among the nation’s growing army of smartphone users.

According to a recent industry report of Internet mobile usage, more Koreans used their handsets to catch up with friends on instant chatting app Kakao Talk than surf the Web using the nation’s No.1 Internet portal or interact with their social circle at its online cafe. 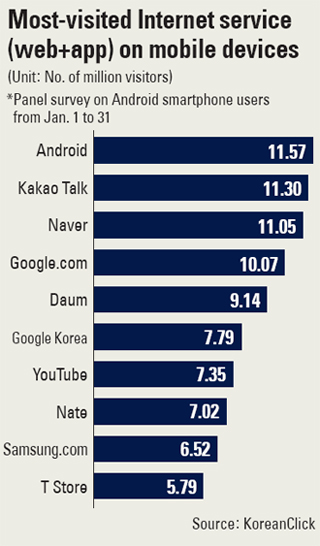 The survey measured the overall traffic seen at Kakao Talk, Naver and Google on smartphones that use Google’s Android platform in January.

Even though the vast majority of Kakao users have never even seen its Web site, its usage was also factored into the calculations; as was Naver’s app, which includes chatting and SNS services; and Google’s main search engine. Other Google services, such as Google Talk and Gmail, were measured separately.

Even though Google only controls about two percent of the Korean Web search market, compared to Naver’s whopping 73 percent, what is notable is that it only slightly trails the nation’s best-loved search engine in terms of overall mobile usage.

This spells bad news for Naver, which has ranked as the No. 1 Internet portal in the world’s most wired country since 2005. For years, smaller rivals have benchmarked its success and envied the iconic status of its signature green search box.

However, the rules of the game have apparently changed with the dawn of the smartphone era, when chatting tools take up more of users’ time and attention, and a cocky young startup called Kakao Talk can wrestle with alligators in the form of Naver and Google and emerge the victor.

Nowadays in Korea, where Kakao Talk does most of its business and draws almost 80 percent of its user base, the app is considered not just an essential way of keeping in touch with friends, but also an exemplary business model.

Some 11.3 million of the 13 million people living in Korea who use smartphones that work on Google’s Android platform used the Kakao service at least once between Jan. 1 and 31, according to a report released by market researcher KoreanClick on Feb. 23.

This took into account both its free messenger app and Web site, which contains limited information.

The survey put Kakao second only to Android itself in terms of usage. Android’s top slot was all but guaranteed as users have no choice but to access the service to download apps, among other basic functions.

Kakao, the runner-up, was followed by Naver (11.05 million users), Google.com, (10.07 million), Daum (9.14 million), Google Korea (7.79 million) and YouTube (7.35 million). Many observers were surprised at how Naver had been dethroned, as well as by how many Google services made the cut, including Google.com, Google Korea and YouTube.

However, if KoreanClick had focused solely on the number of visitors to Internet services on Android-powered smartphones - excluding instant messaging services - Naver would have retained the top spot, followed by Daum, Google, Google Korea, Nate and Cyworld.

“The report may not represent the whole picture as it focuses only on Android users, but it is still an important piece of data that shines a light on the changing paradigm in the mobile Internet business,” said an official from KoreanClick.

More data released by market researcher Metrix shows that Kakao Talk was the most-used app in January among smartphone users in Korea with an 81.6 percent usage rate, followed by Naver (53.5 percent), Facebook (40.2 percent) and YouTube (37.7 percent).

Meanwhile, Naver was the most-used Web service among smartphone users in the country, with 79.9 percent of them using it at least once in January, followed by Daum, Nate and Google, Metrix claimed.

Market watchers said the most interesting thing about the Metrix data is that it showed how apps have become more popular than the Web on smartphones, an unprecedented trend since the market researcher began compiling such data in September 2010.

“Apps have now replaced the Internet in terms of mobile dominance,” Park Rae-hee, one of the researchers at Metrix, told Korean media.

Google’s raging popularity among mobile users also marks an impressive turnaround after it failed to win over Korean PC users as a search engine.