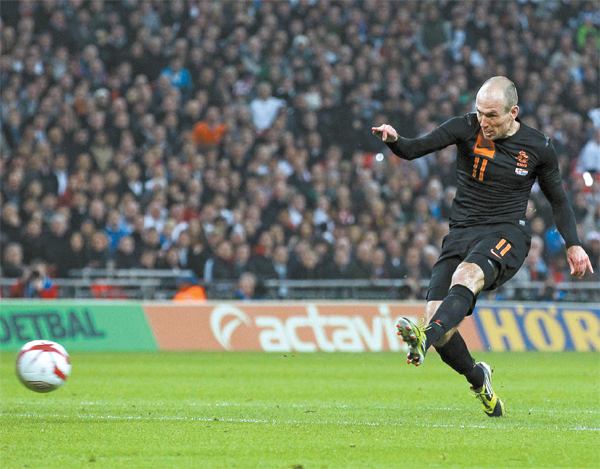 The Netherlands’ Arjen Robben scores his first goal against England during their international friendly at Wembley Stadium in London on Wednesday. Robben scored twice as the Netherlands won 3-2. [AP/YONHAP]


LONDON - With 100 days until this year’s European Championship kicks off, Spain, France and the Netherlands continued their preparations with impressive friendly wins Wednesday.

Roberto Soldado scored a hat trick to lead defending European champion Spain to a 5-0 win over Venezuela in front of a home crowd in Malaga, and France extended its unbeaten run to 18 matches with Oliver Giroud and Florent Malouda scoring for a 2-1 away win over Germany in Bremen.

The Netherlands, European champion in 1988 and a three-time World Cup runner-up, withstood a spirited comeback by a makeshift England team to win 3-2 in London, while Italy lost an unbeaten record in Genoa stretching back to 1924 when it lost 1-0 to the United States.

Few coaches will place too much importance upon the result of friendly matches played under relatively little pressure compared to the June 8-July 1 tournament in Poland and Ukraine, with Germany’s Joachim Low among those to say beforehand he was more concerned with tweaking details and spending time with his players.

But France can take heart from a performance and win that came without several key players. France showed greater imagination in a match that failed to reach the intensity of previous meetings between the two great rivals and Giroud, leading scorer in the French league, put the visitors ahead in the 21st minute with a simple finish.

Malouda effectively sealed the win in the 69th, seven minutes after coming on as substitute, and Germany striker Cacau scored an injury-time consolation.

Cesc Fabregas set up goals for Andres Iniesta and David Silva before halftime, and Soldado added three more in his first appearance for the national team since 2007. Spain has won all four of its matches against Venezuela.

England, led by under-21 coach Stuart Pearce following last month’s resignation of Fabio Capello, looked to have salvaged an improbable draw against the Netherlands when Gary Cahill and Ashley Young made the score 2-2 with just seconds remaining.

Arjen Robben scored his second goal of the match in stoppage time to give the visitors a 3-2 victory.

Robben had put the Dutch in front in the 57th, picking up possession deep inside his own half, racing forward and slotting the ball past goalkeeper Joe Hart as England’s defense dropped off.

Less than two minutes later, substitute Klaas-Jan Huntelaar scored his 31st goal in 50 internationals for 2-0, although he and England defender Chris Smalling both had to be replaced after lengthy treatment for a clash of heads. AP