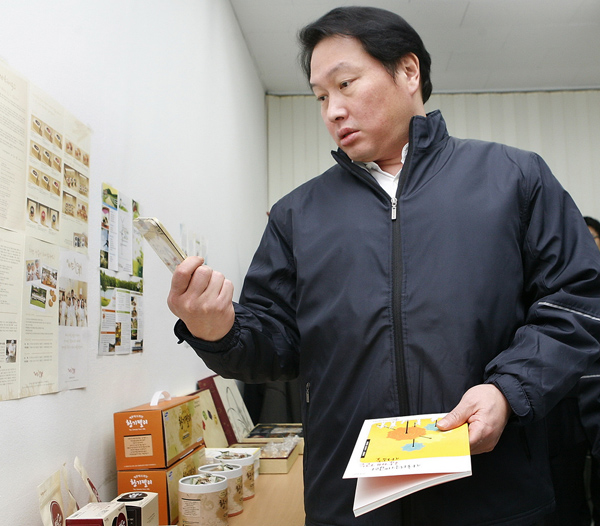 SK Group Chairman Chey Tae-won takes a look at a product made by MRO Korea, SK’s office supplies provider, at the company’s headquarters in Sindaebang-dong, southwestern Seoul, on Feb. 24. Provided by the company


SK Group Chairman Chey Tae-won recently visited MRO Korea, a company that provides office materials such as toner cartridges, paper and pens for SK subsidiaries, to encourage officials as they work on turning the company into a social enterprise next month.

SK Group said Chey called on the company, in which SK has a stake, to transform into a global role model for other social enterprises to benchmark.

“The widespread creation of social enterprises will help address soceital problems, and MRO Korea will spearhead this movement,” Chey said at the headquarters of MRO Korea in southwestern Seoul last week.

The country’s third-largest conglomerate, which has set up the largest number of social enterprises, is creating one for the first time in the maintenance, repair and operations (MRO) sector.

A social enterprise is philanthropic in nature and aimed at serving the public interest. It employs people from vulnerable classes and returns profits to society through various projects and channels.

There are 644 such enterprises in Korea, and their origins date back to the early 1990s when cooperatives sprung up, mainly in poor areas, for the unemployed.

The Asian financial crisis in 1997 caused them to mushroom in tandem with growing demand for jobs for the poor.

Conglomerates are contributing to the growing number of social enterprises as part of their corporate social responsibility (CSR) activities. They have so far set up 30 certified such entities, either directly or indirectly, according to Korea Social Enterprise Promotion Agency.

Of the total, 23 were created by SK subsidiaries. SK Telecom, the country’s No. 1 mobile carrier, runs 21 of them, including two named Happy Lunchbox and Happy Food. The former delivers packed lunches to elderly people and malnourished children from low-income families. It also hires people from these demographics as employees.

“SK is transforming its MRO unit, which is currently worth around 100 billion won, into a separate social enterprise, and this will be the largest of its kind [in Korea],” he said. It will also rank as the first social enterprise in Korea’s MRO field.

MRO Korea was established as a joint venture between SK Networks and U.S.-based Grainger in July 2000 to conduct the MRO business with the aim of supplying SK subsidiaries with cheaper office materials. Reportedly, about 60 percent of its sales have been earned through transactions with SK Group and its subsidiaries.

Amid growing criticism of the country’s conglomerate-friendly environment early last year, MRO businesses owned by the nation’s top chaebol became a target of the government’s co-prosperity policy aimed at large and small businesses.

The government ordered conglomerates to withdraw from the MRO market, saying the sector needs to be protected as a business territory for small and medium-size companies.

Samsung Electronics and eight other units announced at the time that they would sell off their stakes in their respective MRO businesses after criticism that big players choke their smaller rivals and cripple competition by reserving all of their orders for their subsidiaries.

In last June, LG Serveone, an MRO unit of LG Group, received massive cancellations for MRO contracts with public power corporations in affiliation with the Ministry of Knowledge Economy.

SK Chairman Chey acknowledged that a social enterprise cannot cure all social ills, but he said he believed it was a good start.

“As a leading conglomerate, we decided to turn the MRO business into a social enterprise in order to help fix social problems like polarization and low fertility rates,” Chey said. “MRO Korea will become the largest social enterprise, not only in Korea but in the world.”

“The creation of social enterprises by conglomerates is a desirable example of corporate social responsibility,” said Choi Hyuk-jin, director at the promotion agency.

“It is significant that conglomerates are making consistent efforts, not just a one-off gesture, to distribute their wealth via social enterprises.” he added.