DUP tries to smooth out nominations

DUP tries to smooth out nominations 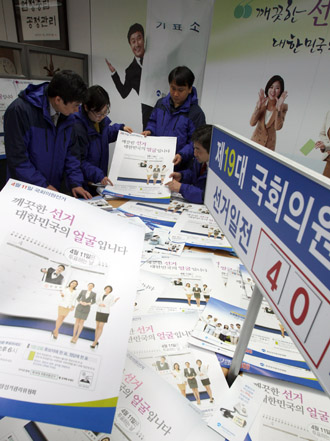 With 40 days left before the general elections, employees of the National Election Commission review posters, pamphlets and signs to promote the election at their office in central Seoul yesterday. The April 11 election pamphlets state, “Clean elections are the face of Korea.” [YONHAP]

The largest opposition party struggled yesterday to normalize its nomination process for the April 11 legislative elections. Its recommendation committee ultimately decided to suspend the review in response to growing resistance and interventions from prominent politicians.

Kang Chul-kyu, head of the Democratic United Party’s nomination review committee, held a press conference yesterday to condemn the party leadership’s intervention in the candidate recommendation process. He has already declared on Wednesday that the committee will stop the review process in protest of the Supreme Council’s interference.

Kang, Woosuk University president and liberal economist who has long been a strong advocate for chaebol reform, was named last month to head the 14-member nomination review committee. At the time, the DUP said it had faith in Kang’s transparency and integrity to lead the party’s nomination reform.

The DUP leadership and the nomination committee, however, found themselves locking horns on Wednesday. The committee was to make the announcement of its third batch of candidates and Kang’s press conference was scheduled for Wednesday morning, but the Supreme Council abruptly postponed the process and canceled the media event. The leadership said it wanted to reconsider some of the nominations that the committee wanted to announce.

Enraged by the leadership’s intervention, Kang declared in the afternoon that the committee will stop its work until he regains his composure.

Kang also held a press conference yesterday to further condemn the DUP leadership for having lost its determination to reform as it gained popularity. “The people’s views toward the DUP are becoming icy,” he said. “The DUP must be afraid of the people.”

He also challenged some veteran politicians’ complaints that they were unfairly ruled out.

“I am confident that I have evaluated the candidates only based on principles without any political considerations,” Kang said. “I am focusing on who are the true leaders for the future, not their factions.”

“The nomination process of the DUP is made through a system, not hand gestures of influential politicians,” Kang said. “Every candidate agreed to accept the outcome, so I expect them to keep their promises.”

He, however, did not say when the nomination process will resume. “I cannot do it when my mind is disturbed,” he said. “When the party becomes humble and expresses how it will change in the future, then I will decide on when and if to resume the review.”