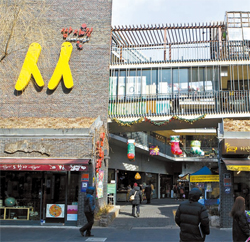 The Seoul City Tour Bus is a convenient way to see the capital city. But for travelers who prefer to get a feel for a metropolis on their own, there are numerous public bus routes that stretch across Seoul and hit beautiful university areas, shopping districts and historic sites. Route Nos. 143, 273 and 472 are among the most popular lines and are a great way to piece together a makeshift bus tour.


Seoul is one of the few cities in the world where you can go shopping and feel as though you are simultaneously traveling through time. The contrast between the Coex Mall in Samseong-dong, southeastern Seoul, and the most traditional area in central Seoul, Insa-dong, is unparalleled. And bus route 143 makes the shopping spree manageable, no matter how many bags you’re carrying by the end.

To get to the Coex Mall, get off at the Korea World Trade Center Station. The mall has practically everything, from book store Bandi & Luni’s to Linkos, a gigantic stationary store. There’s a food court, a multiplex movie theater and the Coex Aquarium. The mall is the first of its kind in Seoul and is packed with crowds over the weekend.

The next stop is Cheongdam-dong, lying about 15 minutes away from Korea World Trade Center Station. Get off at Cheongdam Elementary School and a slew of luxury brand shops and galleries are lined up on both sides, from the boulevard leading from Cheongdam intersection to Apgujeong-ro.

There you will find 10 Corso Como, a three-story boutique from Italy, located diagonally across the Galleria Department Store. It has a cafe-restaurant with a garden as well as a shop that sells not only coffee-table books but also kitchen utensils, interior goods, perfumes and world-class designer garments and accessories.

Having passed through apartment complexes in Jamwon-dong, the bus heads to Express Bus Terminal Station, where subway lines 3, 7 and 9 meet. Given the underground market sells a range of relatively cheap apparel and accessories, it is dubbed the “Dongdaemun Market of southern Seoul.”

Later on in the route the bus heads toward Insa-dong via Myeongdong. Get off at Jongno 2-ga Station and take Insadong-gil toward Anguk-dong Rotary. There you can hop around stores where antique auctions take place, selling miscellaneous items from the 1970’s and 1980’s.

You also can’t miss Ssamzie-gil, a shopping area with restaurants and accessory stores that is popular among shoppers in their 20’s.