This route passes by over 10 universities throughout Seoul and is, unsurprisingly, a prominent bus for college students commuting to class.

It starts at Hongik University in western Seoul. There you will find unique cafes, restaurants and garment stores that are distinguished from those ordinary franchises spotted in other university areas. About a 10-minute walk from Hongik University Station is the Sinchon five-way crossing. Three major universities - Sogang, Yonsei and Ewha Woman’s - are all nearby.

Yonsei is known for its beautiful campus - the political science building Yeonhee, with its facade covered in ivy, particularly adds to the historic feel of the prestigious university. Many cheap restaurants are scattered around Sogang for college students, and the backstreets in front of Ewha are packed with beauty salons, clothing stores, cosmetics shops, cafes and bakeries, appealing especially to female students.

The bus then heads east toward Daehangno, near Sung Kyun Kwan University and Seoul National University’s medical and dental schools. This district is home to many small theaters and studios, attracting a very hip, young crowd. With the Seoul Jazz Academy nearby, Daehangno is also known for its music venues like the Chunnyun Live Jazz Cafe, one of the prominent jazz bars in Seoul.

The next stop is Korea University’s Anam Campus. It stops at three destinations in the neighborhood. Through the Gothic-style gate is the central boulevard - the symbol of the prestigious university. There you can see the main building at the center, the humanities building is on the left and the graduate school library is on the right. These beautifully constructed buildings make you feel as though you have been transported back in time. When spring arrives, students lay out on the lawn basking in the sun while foreign professors are often spotted drinking glasses of wine during their breaks. 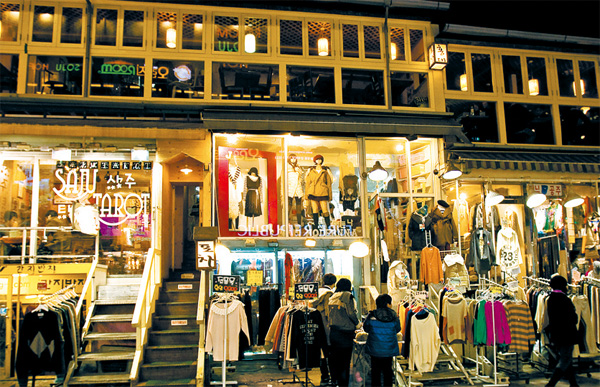 Campus tours are available for those who want a closer look at the various universities. Information is available on their respective Web sites. Cafeterias at the schools are highly recommended as they provide inexpensive Korean food.