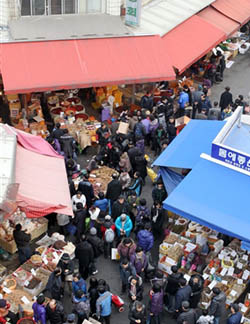 Inflationary pressure, however, still remains as the price of international oil is forecast to keep rising due to the ongoing tension in the Middle East.

According to Statistics Korea, consumer prices grew 3.1 percent in February compared to the previous year, slowing down from the previous month’s 3.4 percent. Last month’s figure was the lowest increase since December 2010, when prices grew by a modest 3 percent. It is also the second consecutive month for price increases to remain in the 3 percent range.

Core inflation, which excludes volatile oil and food costs, grew 2.5 percent from a year earlier, which also decelerated from 3.2 percent in the previous month.

“What drove prices up were gains in industrial goods like petroleum products and rent-related costs,” Sung said.

The price of petroleum products jumped 7.9 percent in February year-on-year and 2.3 percent from the previous month mainly because of a surge in the international price of oil, which went up from $110 per barrel in January to $116 in February.

Gasoline and diesel prices have been rising, affecting drivers nationwide, while prices of LPG, including butane and propane, also jumped. Some people have called for the government to lower taxes on oil but the government remains concerned about an overall drop in tax revenue. The government did say this week, however, that if the international price of oil exceeded $130 per barrel, it will “consider” lowering the taxes.

Also, with the new school year beginning, prices of apparel and shoes jumped a combined 5 percent in February compared to the previous year, while prices of books rose 5.5 percent. Prices of flowers in February, graduation month, increased 27.6 percent. Jeonse, or key money deposits, increased 6 percent while monthly rents rose 3.3 percent from a year earlier. Electricity and water bills also went up last month by a combined 5.8 percent year-on-year, up from a 5.5 percent gain in January.

Despite the overall slowdown in consumer prices, policy makers expect inflationary pressure to continue in the upcoming months and are keeping a close eye on prices.

“The rising price of international oil will continue to contribute to a growth in consumer prices in March,” Sung said. “As part of efforts to lessen the spending burden on ordinary households, the government has introduced several measures such as expanding tuition and childcare facility support in March.”

Last year, Korea’s consumer prices jumped 4 percent from a year earlier, narrowly meeting the Bank of Korea’s annual target in the 2 to 4 percent range. This year, the government predicts consumer prices will grow 3.2 percent on average.