New models, concept cars to be shown in Geneva

New models, concept cars to be shown in Geneva 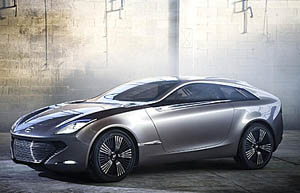 Korean automakers have unveiled concept cars they will show at the 82nd International Motor Show Geneva that starts next week.

Hyundai Motor, the country’s leading automaker, is going to introduce a concept car named i-oniq, a long-range electric vehicle, with a sports car exterior. The four-door hatchback is equipped with a 3-cylinder 1-liter gasoline generator and a lithium-ion motor. When it is in battery mode, it can travel a maximum of 120 kilometers (74.6 miles).

The vehicle can travel on just the electric motor but when it runs out of electricity, the gasoline-powered generator kicks in, giving a range of around 700 kilometers.

The concept car has a sporty and muscular bodyline and is part of Hyundai’s goal of developing environment-friendly technologies.

GM Korea will show off a station wagon version of its Cruze Wagon at the Geneva show. The station wagon complements the sedan and hatchback versions, which have combined sales in excess of one million units globally since the line was launched in 2009.

“The Cruze station wagon caters to an important market segment,” Susan Docherty, Chevrolet Europe president and managing director, said in a statement. “It ticks all the boxes for European drivers in terms of distinctive design, dynamic driving, space and economy.”

The station wagon features a tapering, single arch roofline and comes with roof racks as standard, providing convenience while maintaining a poised and sporty look. New Cruzes are equipped with keyless entry. The car can sense a key in your pocket or purse and the door can be opened. The key is also not necessary to turn on the ignition.

A number of exterior and interior styling changes are being introduced in 2012 for all Cruze models. These include a remodeled front fascia, modified headlamps, a new wheel style, refinements to the center console and a greater choice of seat finishes for the interior.

As part of an effort to boost its presence in the European market, Ssangyong plans to showcase six vehicles, including the Korando Sports, Korando C and Rexton, in a 420-square-meter (4,520-square-feet) showroom.

The XIV-2 is an advanced version of the XIV-1 model, which was introduced in September 2011 at the Frankfurt Motor Show. The new model is a premium entry CUV concept car that Ssangyong will promote as a global strategic model with a unique style and aerodynamic design.

The motor show is held at the Geneva Palexpo. It is open to the press on March 6 and 7 and to the public from March 8 through 18.