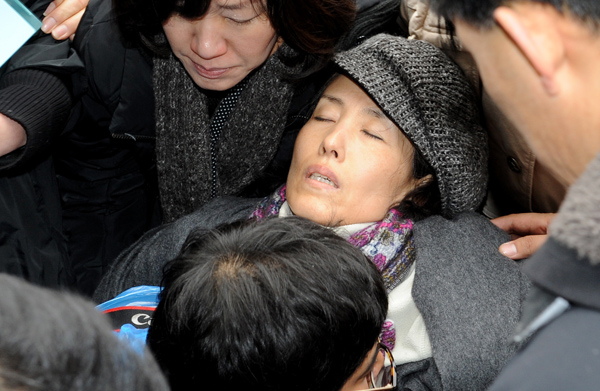 After an 11-day hunger strike, Representative Park Sun-young of the conservative minority Liberty Forward Party collapsed yesterday during a rally in front of the Chinese Embassy to demand the release of North Korean defectors. [NEWSIS]


South Korea and China yesterday discussed the ongoing controversy over forced repatriations of North Korean defectors from Chinese territory, in the midst of rising international concerns about the brutal punishment they are likely to face when returned home.

The two countries, however, failed to narrow down their differences on the matter, as China, despite the South Korean government’s repeated requests, made clear that it did not want the matter to gain any more international attention.

Chinese Foreign Minister Yang Jiechi yesterday paid a visit to Seoul and met with his counterpart, Kim Sung-hwan, and President Lee Myung-bak in separate meetings to discuss a series of pending issues between the two countries.

During the meeting at the Blue House, Lee told Yang that China should cooperate actively to resolve the defector issue.

According to presidential spokesman Park Jeong-ha, Yang replied that he will pay attention to Seoul’s concerns and relate them to Chinese President Hu Jintao.

Sources said Kim cited a growing domestic and international outcry over China’s crackdown on defectors in its territory. He also talked about international rules to protect refugees at risk of being punished in their homeland if they are sent back, asking China to handle the matter based on the humanitarian principles.

Yang didn’t give a clear response to the request, sources said. He said China will deal with the issue on the basis of domestic and international laws and also on a humanitarian basis.

Yang also said China does not want to see the matter gain further international attention, sources said, an overt complaint about Seoul’s appeal at the UN Human Rights Council meeting earlier this week.

Sources said the two ministers spent 50 minutes out of a 70-minute meeting discussing the defector issue.

The two ministers also discussed North Korea’s agreement with the U.S. this week to suspend a uranium enrichment program and put a moratorium on missile and nuclear tests for food aid.

Kim and Yang welcomed the deal between North Korea and the United States, sources informed about the matter said.

According to diplomatic sources, Robert King, a U.S. special envoy for North Korean human rights issues, will meet with North Korean officials for follow-up talks on how the U.S. will donate 240,000 metric tons of nutritional aid.

However, despite the thaw in North Korea-U.S. relations, the U.S. Department of State clarified that restarting six-party denuclearization talks is impossible without North Korea’s actual disarmament.

“The [North Korean and U.S.] statements spoke about measures that would be taken immediately and would be verified by the IAEA as presteps to being able to get back to six-party talks. So that’s what our statement was focused on,” said Victoria Nuland, spokesperson for the State Department, on Thursday at a briefing. “The North Korean statement goes on to talk about what they hope will happen in the six-party talks which, as we made clear when we backgrounded yesterday, we can’t consider going back to until we verify this first set of steps.”

A senior official at the Blue House yesterday told reporters that South Korea isn’t ready to talk about restarting the stalled construction of two light-water reactors. The North said in its statement Wednesday that they will “discuss the matter of providing light-water reactors and easing the sanctions against the North at first, if the six-party talks are resumed.”

“We haven’t started any discussions yet,” the official said. “Supporting light-water reactors is not a matter that is being discussed now.”

In 1994, Washington and Pyongyang reached the so-called “Agreed Framework,” in which the North promised to dismantle its nuclear facilities in return for two light water reactors. Construction led by South Korea was halted in 2002 when the North was found to be enriching uranium.