Prosecutor offers to step down in defamation case

Prosecutor offers to step down in defamation case

Embroiled in a controversy for having received a request from a judge - the husband of celebrity politician Na Kyung-won - to indict an Internet user for defaming his wife, a prosecutor yesterday offered to resign over the scandal.

Park Eun-jeong, a 40-year-old prosecutor at the Bucheon branch of the Incheon District Prosecutors’ Office expressed her intention to resign yesterday. She had been accused by liberal political podcast “Naneun Ggomsuda,” (I’m a Petty-Minded Creep) of receiving a request from Judge Kim Jae-ho, husband of former Grand National Party lawmaker Na, to indict a netizen on charges of slander in 2005.

Both Park and Na, on behalf of Kim, have denied the charges, but Park still expressed her intention to step down yesterday.

The Supreme Prosecutors’ Office said yesterday that Park has submitted her resignation over the recent scandal, but won’t accept it as there are no grounds to hold her responsible for the scandal. 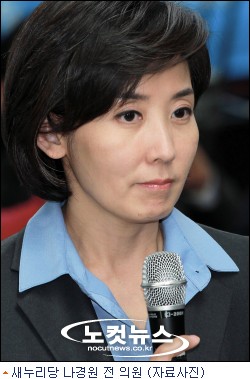 According to Song In-taek, the assistant prosecutor general at Park’s office, she had not discussed the scandal with her co-workers. Other members of the prosecution learned of the allegation only after the podcast revealed it.

The scandal first surfaced in October last year during the Seoul mayoral by-election, which Na lost to Mayor Park Won-soon, and was once again discussed on Tuesday, revealing Park’s real name.

In its Tuesday show, the podcast claimed that Park had confessed what had happened in 2005 to the Seoul Central District Prosecutors’ Office recently. The podcast panelists said, “If this case is proved to be true, it is an act that deserves disciplinary action for violating the code of ethics,” and added, “[Judge Kim] asked a personal favor for the case concerning his wife when the case wasn’t even related to his other ones.”

Moreover, panelists said, “Prosecutor Park is now branded as the betrayer of the organization, which obviously means the end of her career as a prosecutor,” and asked the listeners to pay attention to what would happen to Park.

While the podcast claimed that Park had indicted an Internet user on charges of slandering Na by calling her pro-Japanese for attending an event for Japan’s Self-Defense Forces in 2005, the indictment was not made by Park. Park investigated the suspect but took maternity leave in April 2006, and the indictment was made by another prosecutor who took over the case.

Park still decided to leave the prosecution, leaving a short message to her coworkers. According to Song, Park came to work at around 7:30 a.m., wrote a message of her intention to resign at 7:50 a.m., and left the office at 10:30 a.m.