Kwak’s right back in it with favors, special hires

Kwak’s right back in it with favors, special hires 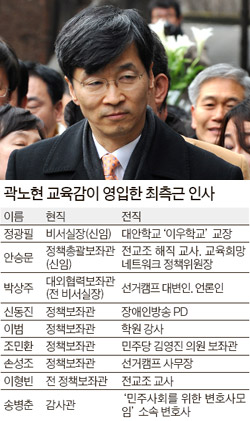 Only weeks after his release from custody after being convicted on bribery charges, Seoul Education Chief Kwak No-hyun was again embroiled in allegations that he gave promotions as favors to his secretaries and requested that fired teachers be rehired.

The Ministry of Education, Science and Technology yesterday refused the superintendent’s request to rehire three liberal teachers who had been previously fired from private schools. Kwak was trying to rehire them as public high school teachers.

The ministry said there isn’t any reason to rehire them at this moment and that kind of special recruitment could prompt protests from other teachers.

However, Kwak refuted they were fired fairly, claiming it was due to whistle-blowing within the school, and demanded the ministry reconsider the issue.

It is not the first time that the liberal head of Seoul’s education office has had a face-to-face confrontation with the ministry.

After being detained for four months on charges of bribing a former campaign rival to drop out of the race for education chief in 2010, Kwak was convicted of the charge, fined and released from custody in January.

He returned to office on Jan. 20, but quickly clashed with the central government over the controversial student rights ordinance.

Criticism has been harsh of the Seoul Education Office since the superintendent tried to promote five of his secretaries from seventh-level civil servants to the sixth-level.

Officials at the education office objected to the move because it normally takes at least 10 years to get a promotion under the Korean government’s system.

The five secretaries have worked for Kwak only for a year and half.

After facing the criticisms, Kwak withdrew the promotion requests, saying “It was bad timing to carry out such a promotion,” at a press meeting on Thursday.

However, he still hired two fifth-level secretaries, in addition to his current one.

The two newly appointed secretaries are both his close confidants, raising criticisms that the superintendent is attempting to make his office a reclusive place guarded by his close aides.

An official of the Education Ministry told the JoongAng Ilbo, “Employing a specific teacher for public school violates the current education law that gives equal opportunities to applicants. Kwak is trying to change the education office into his own private office.”

A university professor also said on condition of anonymity, “Kwak, facing his second trial, is taking excessive measures to place his people in the education office.”

Observers said that Kwak is trying to punish him for speaking up by exiling him to the suburbs.

“He was supposed to be sent to the suburbs previously, but there wasn’t anyone in the office to make it happen except me, because I had been in jail,” Kwak explained to reporters on Thursday.

The official also told reporters that he voluntarily applied to go to the local branch.

Kwak also blocked the e-mail service of a leader of the office’s labor union who lambasted the superintendent’s promotion and special recruitment practices.