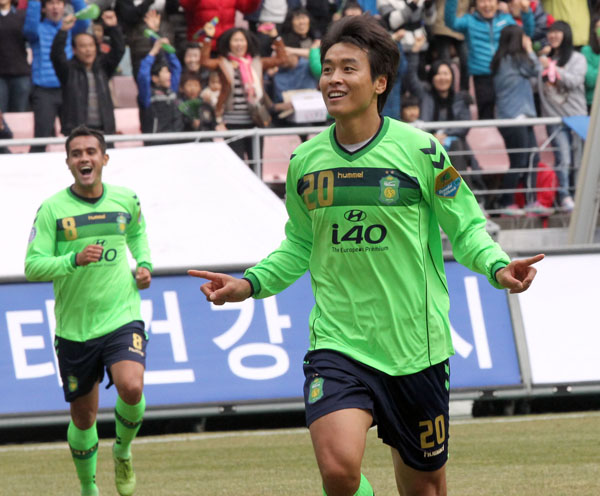 
Jeonbuk Hyundai Motors FC striker Lee Dong-gook made history on the opening day of the 2012 Korea Professional Football League season, breaking the record to become the all-time top scorer in the league with 117 goals.

“Before stepping onto the pitch, I always think that I will have a chance to score and today was no different,” Lee said in the post-match interview on Saturday. “In the end, I’m happy that I scored and our team collected a victory.”

The 33-year-old Lee, who made his professional debut in 1998 with the Pohang Steelers, was only one goal behind retired footballer Woo Sung-yong’s 116-goal record before this season and it didn’t take him long to break the record.

Just 13 minutes after the kickoff, Lee received a pass from Chinese national Huang Bowen and put the ball over Seongnam goalkeeper Ha Kang-jin to tie Woo’s record and make Jeonbuk the first team on the scoreboard. It was also first goal of the 2012 K-League season.

Five minutes later, another pass from Huang found Lee’s right foot, and the Korean striker became the all-time highest scorer in the K-League.

“I always start the season with the mindset that I will score a goal in every match,” Lee said. “Since there are 44 matches this season, I aim to score 44 goals.”

Despite losing the match, Seongnam coach Shin Tae-yong congratulated Lee for making history. Lee was with Seongnam before moving to Jeonbuk in 2009, which was the year Shin took over the job.

“He should keep cruising after shedding the burden of breaking the record,” Shin said. “If he continues to perform like this, it will be big boost not only for Jeonbuk, but also for the national team.”

Lee’s two goals indicate he will continue his streak from last season and in recent international matches.

Lee, the two-time K-League MVP, had one of his best seasons last year. He was first in assists (15) and the second best goal scorer with 16 goals. The former Werder Bremen and Middlesbrough FC striker eventually won the MVP award and also helped Jeonbuk to win both the regular season and championship titles.

Despite his efforts, Lee didn’t get much of an opportunity to play with the national team last season. With coach Cho Kwang-rae preferring European players, Lee only featured two times for Korea.

But with Choi Kang-hee, who guided Lee in Jeonbuk for the last three seasons and became the new national team coach last December, Lee started to gain confidence and extended his tally to international matches.

Lee collected two goals against Uzbekistan in a friendly on Feb. 25 and scored an opening goal against Kuwait last Wednesday to help Korea reach the final round of the Asian qualifiers for the 2014 FIFA World Cup. Including the K-League goals on Saturday, Lee has bagged five goals in his last three matches.

That was especially good news for Choi, who watched Lee at the Jeonju World Cup Stadium on Saturday. The 53-year-old coach said that this season could be Lee’s best ever, better than 2009, when the striker won both the MVP award and top scoring honors.

“It’s fortunate that he broke the record early in the season since his performance could have suffered if he had to think about it,” Choi said. “I have little concern since there are many games to play this season, but because he is a good player, I think he will perform better.”