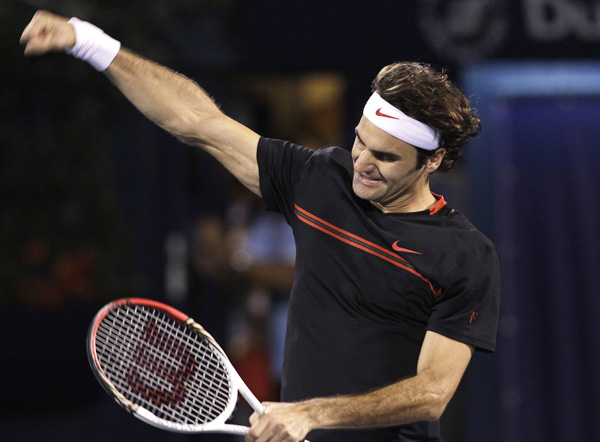 The second-seeded Federer didn’t drop a set all week and was rarely threatened by the third-seeded Murray, who was coming off his semifinal win against top-ranked Novak Djokovic.

The win was Federer’s fifth title in seven tournaments and his 72nd overall. He also won two weeks ago in Rotterdam.

“This is perfect. This is great. Any title is a good one, I’ll tell you that,” Federer said. “I have a losing record against Murray, I do believe, and not against Novak .?.?. I don’t want to say [beating Murray] means more to me but it’s a beautiful victory.”

The 16-time Grand Slam champion kept Murray off balance much of the match, outplaying the 24-year-old from Scotland with a mix of powerful groundstrokes, drop shots and the occasional serve-and-volley.

Murray struggled with his backhand and serve. He won 85 percent of his first service points against Djokovic, but only 48 percent against Federer.

“For sure I made a few too many mistakes in the second, and he was playing a lot more aggressive than in the first set,” Murray said. “Sets can come down to just a couple points. You get a lucky shot here or one great shot and you can break the set wide open.”

Federer saved two break points when down 3-2 in the first set at the Aviation Club. He saved the first when Murray hit a forehand long and won the second with a backhand volley.

Federer broke Murray to go up 6-5, and took the first set when Murray hit a forehand wide.

The two players traded breaks early in the second set before Federer broke decisively to make it 5-4. Murray saved one match point before the Swiss star hit a forehand winner into the corner.

“The match was close, I think in both sets, I just gave myself more opportunities than Andy did overall,” said Federer, who used the fast surface to his advantage.

Murray insisted that his Friday win over Djokovic was not on his mind as he took the court against Federer.

“It was a good win yesterday, good win the day before, tough match today,” Murray said. “So I’m just happy with the week, because at this stage last year I was in a very different position, different frame of mind.”

Despite the loss, Murray said his performance this week will help him at upcoming tournaments in the United States.

“I was happy I managed to adjust to the court,” Murray said. “The conditions over in Indian Wells [and] Miami are going to be very, very different to here. Much slower court, which hopefully will suit my game a little bit better.”

The 30-year-old Federer now heads to New York, where he will play an exhibition match Monday at Madison Square Garden against Andy Roddick.

“There is no substitute to confidence,” Federer said. “I’ve played great.” AP