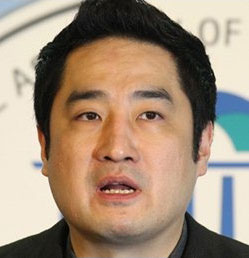 Independent lawmaker Kang Yong-seok announced that he would resign from his position on Feb. 23 when his accusation that Seoul Mayor Park Won-soon’s son tried to dodge his compulsory military service turned out to be false.

However, Kang is now embroiled in another controversy. He submitted his letter of resignation on Feb. 29 when he should have submitted it before Feb. 27 for it to be accepted during the National Assembly plenary session.

Kang’s belated action has drawn criticism that he was trying to prevent the resignation from taking effect immediately by deliberately submitting the letter of resignation after the scheduled plenary session.

Park was indicted on Feb. 21 over an attempt to buy votes in the 2008 leadership election of the ruling party, becoming the first incumbent leader of the legislature to face criminal prosecution.

In January, Kang insisted that Park Ju-sin, 27, the son of the Seoul mayor, submitted a false MRI picture to the Military Manpower Administration in order to be exempted from his military duty. Park’s innocence was proven on Feb. 22 when he underwent an open physical examination at Yonsei University’s Severance Hospital to clear himself of suspicion.