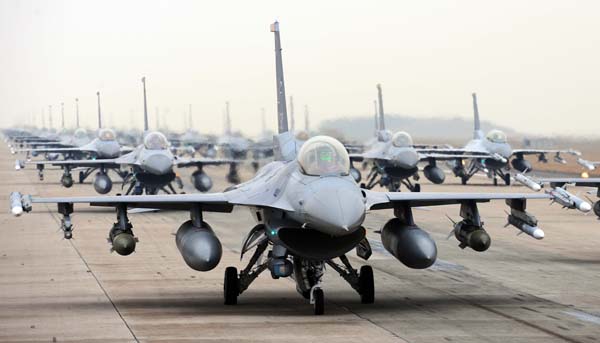 Fully-armed KF-16 and F-16 fighter jets prepare for takeoff during a joint military drill between South Korea and the U.S. at the Kunsan Air Base in Gunsan, North Jeolla, Friday. The drill is designed to check the quick equipping and dispatching of jets for an assault on key enemy targets in case of emergency. Around 10 KF-16 and 50 F-16 fighter jets were mobilized during the drill, Seoul’s Ministry of National Defense said yesterday. [YONHAP]


As South Korea and the United States continued a massive joint military drill, North Korean leader Kim Jong-un made a rare visit to the Demilitarized Zone at the heavily armed inter-Korean border where he ordered his troops to stay vigilant, the communist regime’s state media reported yesterday.

Kim’s visit to the truce village of panmunjom was announced by the North’s Korean Central News Agency, following Pyongyang’s recent series of threats of a “sacred war” against the South. 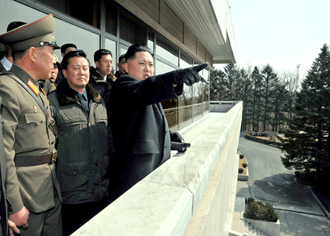 North Korean leader Kim Jong-un points towards South Korea as he visits the truce village of Panmunjeom in the Demilitarized Zone in this undated photo released by the North’s KCNA news agency yesterday. [REUTERS/YONHAP]

The report said Kim has personally inspected the situation in the South from the observation tower and ordered North Korean troops at the border to be on the highest alert.

“If there will be a war, our military and people will make sure the enemy will surrender, not just agree to an armistice,” Kim was quoted as saying in the report.

The first reported panmunjom visit by Kim as the regime’s successor since his father Kim Jong-il’s death in December last year was the latest in a series of recent activities regarding the North’s military. On the eve of the beginning of the South Korea-U.S. “Key Resolve” joint military drill, Kim visited a military unit under the 4th Army Corps in the North’s Haeju.

The North has long demanded the annual joint exercise, which began on Feb. 27, be stopped, calling it an attempt at a northward invasion.

Kim also inspected the Strategic Rocket Force Command in Pyongyang on Friday, only days after Pyongyang and Washington announced a nuclear deal on Wednesday.

North Korea experts also said Kim’s inspections of the rocket command and panmunjom are to pressure Washington ahead of the upcoming working-level talks to discuss the details of the nuclear deal, including food aid and the return of nuclear inspectors to the North.

Baek Seung-joo, director of the Center for Security and Strategy at the Korea Institute for Defense Analyses, said it is also a message to the North’s military, which could feel uneasy about the recent diplomatic developments in the U.S.-North Korea talks.

Tensions between the two Koreas have escalated rapidly. About 150,000 North Koreans rallied at the Kim Il Sung Square in Pyongyang yesterday to condemn the South.

The event, attended by the largest gathering of the North Korean public since the funeral of Kim Jong-il, was aired live by the North’s media.

At the rally, Ri Yong-ho, chief of the general staff of the Army, read a statement to renew the threat of a war.

“All members of the Workers’ Party and the laborers will join our troops to sweep out the enemy leader Lee Myung-bak and achieve unification of our homeland,” Moon Kyong-dok, a Workers’ Party secretary in charge of Pyongyang, told the participants at the rally.