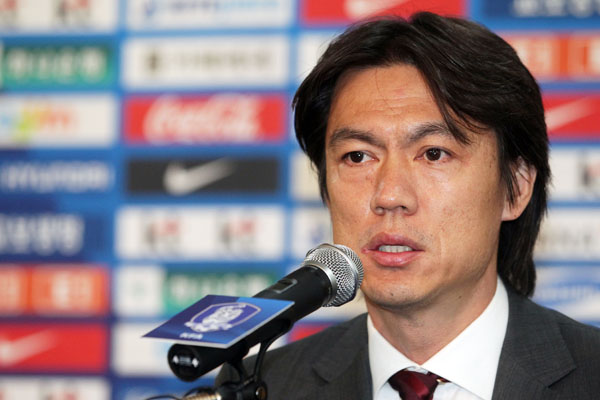 
Hong Myung-bo, the coach of the Korean Olympic football team, said yesterday that players will be selected for the final Olympic squad based on the way they play in July, clearing out speculation about squad selection, including wild cards.

Hong made the announcement at his first press conference since leading Korea to the London Olympics last month.

The Under-23 team booked their berth at the Summer Games with a 3-0 victory over Oman on Feb.22.

The Taeguk Warriors has one final match left to play - against Qatar on March 14 in Seoul - but Korea will finish top of Group A regardless of the result.

“I’m happy that we qualified for the Olympics and also want to say thank you to our players,” Hong said. “We have about four months left, but will prepare hard to give a good performance on the Olympic stage.”

Korea, making its ninth overall appearance and seventh in a row at the Olympics, has never won a medal in men’s football.

The team’s best performance came at the 2004 Olympics in Athens where the nation reached the quarter finals.

Hong said the team needs to learn from the past.

“Winning a medal at the Olympics is not easy at all,” Hong said. “The important thing is we have to look back at past tournaments and see what we did right and wrong.”

The 43-year-old coach said that the most important thing to consider will be the form of the players in July.

“Whether it’s the K-League or overseas, I will keep a close eye on players’ performances and every player will be evaluated with a blank slate,” Hong said.

Teams competing in the Olympics are comprised of players under 23 years of age, with the exception of three wild cards.

Hong has been reluctant to discuss the wild cards recently but admits that they may play a part.

“It is true that we do have positions that need some help,” Hong said. “But it’s not always the case that the best players give the best results. We have to consider whether the player can fit in and adjust to our system.”

One possible wild card candidate is striker Park Chu-young, who turns 27 in July. The former national team captain is currently struggling to find playing time with English club Arsenal, but has experience playing with Hong’s side as he participated in the Guangzhou Asian Games in 2010.

Hong, who himself was a wild card in 2000 Olympics but later withdrew because of injury, said Park is still a core player in Korean football and that he is a possible candidate, but will not talk about it further at the moment.

“As I’ve experienced, being a wild card brings a lot of pressure and responsibility,” Hong said. “It’s too early to talk about Park being a wild card, but the important thing is whether he will be in good form in July.”

Meanwhile, Hong also expressed his appreciation to senior national team coach Choi Kang-hee for his cooperation in player selection at the Asian qualifiers. Hong has had disputes over player selection with Choi’s predecessor Cho Kwang-rae in the past.

“If it wasn’t for Choi’s consideration and cooperation, we would not have qualified for the Olympics,” Hong said. “Choi saved both the Olympic team and the national team.”