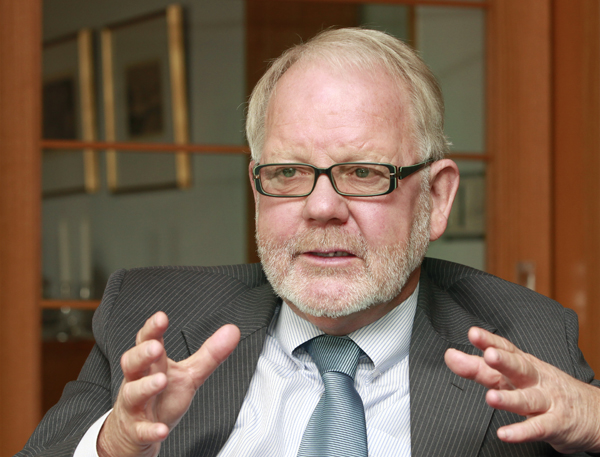 
Norway seeks more cooperation with Korea on development of the North Pole, a region emerging as the “next Africa” for its rich natural resources, according to the top Norwegian emissary in Seoul.

“We will take part in cooperation on the Arctic, and then Korea will soon become an observer to the Arctic Council,” said Torbjorn Holthe, new Norwegian Ambassador to Korea, in an interview with the Korea JoongAng Daily last Wednesday.

Norway is a member of the Arctic Council, a gathering of the eight Arctic states that have led the development as well as preservation of the North Pole since 1996.

Korea, an ad-hoc observer to the council, hopes to be a permanent observer of the exclusive club, a position some other countries including its Asian rivals, China and Japan, are also scrambling to secure.

Holthe predicted Korea will become a permanent observer next year. The council meeting to decide on new membership is slated for May 2013.

With its own initiatives to supplement the council-led efforts, the Scandinavian country has carried out High North policies intended to protect the environment, maintain settlement patterns and promote business development, and talked with other countries outside the region for possible cooperation on the development of the region. The country’s special ambassador assigned to the High North policies will come to Seoul in May to enhance cooperation with Korea, Holthe said.

The ambassador said Norway-Korea cooperation on the issue could help advance Korea’s ongoing research in the North Pole.

The commercial benefit is another possible outcome of the bilateral cooperation, he said.

“We are all interested in the High North’s possibilities when it comes to mineral, oil, gas, fisheries, of course, pollution, melting down of the poles, etc.,” he said.

According to a 2008 study from the United States Geological Survey, approximately 13 percent of the undiscovered oil across the world will be discovered in the North Pole.

Holthe took office in Seoul in November late last year, replacing Didrik Tonseth who oversaw the implementation and development of the 2006 free trade agreement between Korea and four European countries including Norway. On the back of the treaty, bilateral trade rose from $825.2 million in 2001 to $3.96 billion last year with Norway’s exports last year amounting to $1.56 billion and Korea’s exports $2.41 billion.

The parties of the treaty, called EFTA, which also includes Liechtenstein, Iceland and Switzerland as its members, will gather in Seoul this month for assessment and possible improvement of the treaty, the ambassador said.

Holthe said he applied to work in Korea given his interests in Korea’s marked transition to a significant global player that goes beyond economic arenas.

“There are lots of new areas in which we can cooperate with Korea, not only in business and culture, but also High North, international development and green growth,” he said.

He spoke highly of Korea’s role in a global forum on aid-effectiveness in Busan hosted late last year and said Norway hopes to share its experiences as a long-time donor of international aid.

Norway will participate in the Seoul Nuclear Security Summit to be held March 26-27 and Norway Prime Minister Jens Stoltenberg will come to discuss security at nuclear sites to prevent another nuclear crisis after the one in Fukushima, Japan, last year, the ambassador said.

“All these 50 states come to Korea and that underlines the importance of the topic to reduce the danger of nuclear terrorism,” he said.

The upcoming international expo to be held in the southern coastal city of Yeosu in May has an ocean theme. Norway will participate in the event with a fitting exhibition highlighting Norway’s coastline features. The ambassador hoped many Koreans will visit the Norway Pavilion during the three-month-long expo.

The ambassador said raising Korean public awareness of his country will be one of his foremost goals during his term in Korea.

In April last year the Norwegian Embassy decorated the walls of Samgakji Station with photos showing Norwegian nature, history and culture as part of the efforts.

The embassy is currently holding a photo competition. The person who submits the best photo using the Norwegian features in the station as a backdrop will win a round-trip ticket to Norway for two people, the embassy said.