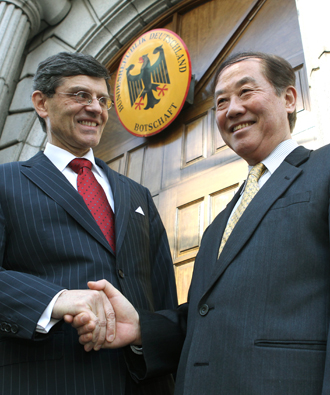 There is an old saying in Korea that even mountains and rivers change over the space of a decade. For Doe Phil-young, a press officer with the German Embassy in Korea, the local landscape as it stood before he joined the diplomatic mission 40 years ago must be barely recognizable to him now.

Perhaps the longest-serving Korean member of a foreign diplomatic mission in the country, Doe said his four decades with the German embassy have been filled with memorable moments. He elaborated on these in more detail during last Thursday’s meeting with the Korea JoongAng Daily, when he sat down and reflected on his achievements on the 40th anniversary of his joining the mission on March 1, 1972.

He has also been an eyewitness to the expanding ties between Korea and Germany. In 1972, their bilateral trade volume stood at $118 million, but this number had grown to a whopping $26.5 billion by last year.

“I joined the embassy largely because the pay and the working hours were great,” he said, adding that his salary as a press officer was almost double that of his previous job as a material engineer with a Korean firm. “But it ended up giving me more than just great working conditions. It reshaped my life.”

He said the most memorable moment of his service with the embassy was a speech given by then-German Chancellor Helmut Kohl at the inter-Korean border calling for peace and unification. Kohl, who served as the chancellor of West Germany from 1982 to 1990, and of a reunited Germany from 1990 to 1998, was one of the main architects of the country’s reunification. During his visit to Korea in 1993, he gave the speech at the Bridge of No Return in the truce village of Panmunjeom.

“It was really touching to see the leader of a unified Germany speak about Korean reunification,” he said. “Any Korean would have been moved.”

Doe also remembered the German diplomats’ reactions when the Berlin Wall collapsed in 1989. “They were really happy,” he said. “But their reactions were rather calm. The Germans all knew that reunification would come one day. They were just surprised that it happened then. I remember the Korean staff actually seemed more thrilled. We all felt so strongly about it because of the obvious parallel with our own situation.”

He said the fall of the Berlin Wall in 1990 also marked his busiest time at work as Koreans wanted to know everything about Germany’s reunification.

“So many reporters went to Germany to cover the story and I was busy arranging their trips and providing information,” he said.

Since Doe joined the mission, he has tirelessly supported the Korean press. As of this year, 150 Korean reporters have visited Germany at the invitation of the government, and all of these trips have been at least partially arranged by Doe. He has also assisted the local press corps during the trips of six Korean presidents to Germany, and helped make arrangements for German media when no fewer than seven German leaders have come to Korea.

He said another memorable achievement was arranging for the German Bundesliga football league to be aired in Korea in the 1980’s so Korean fans could watch the games of Cha Bum-Kun. “I introduced MBC to Germany’s national broadcasters in order to help facilitate local broadcasts,” he said, adding that the tapes of the matches were initially sent to Korea in diplomatic pouches.

Recalling his 40 years of helping bolster Korea-German ties, Doe said he has seen remarkable developments, especially in terms of economic, cultural and social exchanges. Only one shortcoming, he said, was the slow pace of developing political ties.

“Korea’s diplomacy is so focused on the four superpowers of the United States, China, Russia and Japan,” he said.

In honor of Doe’s 40 years of serving the embassy, as well as his 65th birthday, which fell yesterday, German Ambassador to Korea Hans Ulrich-Seidt hosted a dinner at his residence in Seoul.

Doe said he plans to retire next year.