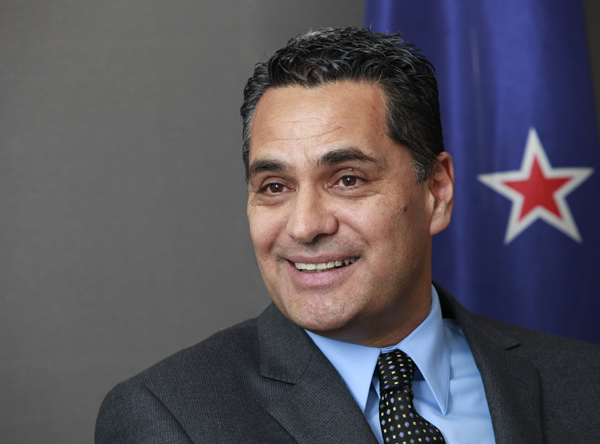 
Patrick Rata, New Zealand’s ambassador-designate to Korea, is aiming to mark the 50th anniversary of diplomatic relations between the two countries this year with the completion of a pending free trade agreement.

"My predecessors did do an outstanding job of moving this negotiation forward."  Rata said. “As a person with considerable experience in trade relations, I know there are always challenges and negotiations that are often very complex, but the results are evident: We will both see benefits.”

The ambassador-designate is a known trade expert who was a senior official at the World Trade Organization for 10 years. He also worked for the New Zealand Permanent Mission to the United Nations in New York and headed the Koreas and Japan Unit at the New Zealand Ministry of Foreign Affairs and Trade in 2009 and 2010.

“This is an important year for relations between our two countries,” Rata said. “President Lee Myung-bak and Prime Minister John Key have declared this a year of friendship. In addition, March 26 marks the 50th anniversary of diplomatic relations between our two nations. Concluding the Korea-New Zealand FTA is a wonderful, fitting way to mark this year of friendship.”

Manufacturers in Korea have been hesitant to proceed with the long-stalled trade negotiations due to the relatively small trade volume between the two countries.

However, Rata stressed that he is sure of the benefits to both countries.

“The pact will boost trade and bring benefits to both countries, and elevate bilateral relations to the next level. The FTA will also deepen commercial ties for the next 50 years,” he said. “We know the FTA will help the Korean economy grow by $6 billion. It will also help Korea achieve its export goals and boost Korea’s small- and medium-sized enterprises.”

“I would say that Korean farmers have nothing to worry about,” he said. “We are very small suppliers of agricultural products to Korea; I think we account for around 3 percent of Korea’s total agricultural imports, so we simply don’t have the capacity to flood the Korean market.”

The ambassador-designate also said that the trade deal would bring fresh food from New Zealand, including dairy products and wine.

“Imports from New Zealand will benefit consumers here and provide important imports for Korean manufacturers,” he said. “We have a full range of products that are safe, environmentally friendly and high quality, including wine, honey and kiwis.”

Rata also pledged to bolster bilateral relations in other sectors.

“The relationship between our two countries was significant during the Korean War. New Zealand is very proud of our service in the war, and we know Korean people also value the service and sacrifices of New Zealanders,” Rata said, “And we’ve continued to support security on the peninsula.

“Today I think the relationship has deepened in trade, economics and investment, and we are a priority partner with Korea in the IT industry,” he said. “We also share common values and some wonderful social and cultural connections. For example, New Zealand has a significant Korean community, which makes tremendous contributions to our society.”

Rata is likely to accede to the post within the month, though the exact date has not yet been confirmed.