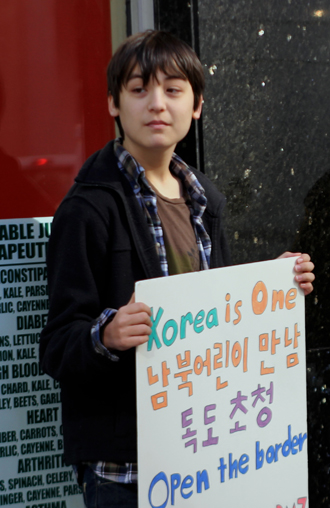 Jonathan Lee, 15, holds a one-person demonstration in front of the Democratic People’s Republic of Korea Mission to the United Nations in New York City on Jan. 21. [YONHAP]

A 15-year-old environmentalist and advocate of spreading awareness of Korean issues is promoting an international day of peace for children.

Half a year ago, the North Gyeongsang Provincial Government named Korean-American Jonathan Lee, who is from Mississippi, as its honorary ambassador for the Dokdo islets and Ulleung Island in order to advocate for Korea’s sovereignty over Dokdo and generate interest in curbing pollution in the area.

“I went to Dokdo last year and I was very impressed with how beautiful it was. In fact, it was the most beautiful island I’ve ever seen,” Lee said in an interview with the JTBC show “People and Talk” on Feb. 24. “The water was so clear you could see right down to the bottom.”

Lee has been especially active about protecting sea lions facing extinction in the area.

Asked whether his friends are aware of the Dokdo issue, he replied, “Some of my friends do know about the issue, but there are lots that do not, so I believe we need to spread the word about the conflict.”

Lee has also been busy promoting peaceful dialogue between the two Koreas and has received support from world leaders, including President Barack Obama. In August 2010, he visited North Korea and sent a letter to Kim Jong-il suggesting the creation of a “Peace Forest for Children in Panmunjom,” a village on the inter-Korean border.

“My letter talked about a Children’s Peace Forest but most importantly International Children’s Peace Day, a day of remembrance for children in areas of conflict,” Lee said. “I suggested that the day be created and a meeting between North and South Korean children be scheduled for March 21.”

The purpose of the event is to bring awareness to the plight of children in war zones or conflict areas, and the date was chosen because it heralds the Northern Hemisphere’s first day of spring.

International Children’s Peace Day is sponsored by the Korean Forestry Service and organized by the International Cooperation of Environmental Youth, a humanitarian group founded by Lee in 2009. It is to be held in Panmunjom on the inter-Korean border with children from both Koreas. Lee also wants to plant a peace forest in the DMZ.

Lee won fame after releasing a web cartoon on his Web site, www.gogreenman.com, with the help of his father when he was 10 years old.