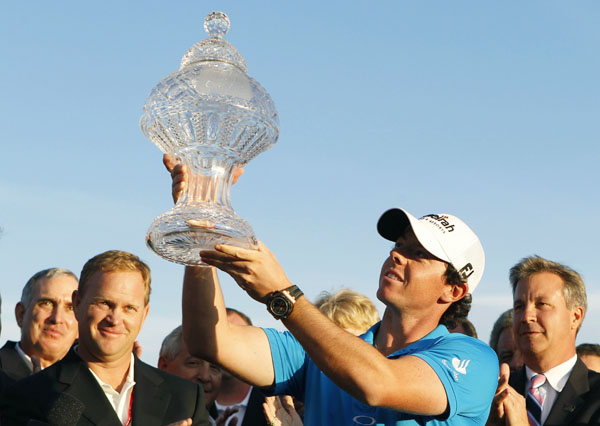 Rory McIlroy of Northern Ireland holds up the winner’s trophy after becoming golf’s new world No. 1 player with his win in the Honda Classic PGA golf tournament at PGA National Golf Club in Palm Beach Gardens, Florida, on Sunday. [REUTERS/YONHAP]


PALM BEACH GARDENS, Florida - Rory McIlroy won the Honda Classic with a performance worthy of the new No. 1 player in golf.

Right when it looked as though McIlroy had no serious challenge Sunday, Tiger Woods put some color into that red shirt with a birdie-eagle finish for a 62 - his lowest final round ever - to get within one shot of the lead.

McIlroy could hear the roar from the farthest corner of PGA National, and the 22-year-old from Northern Ireland responded with some clutch golf of his own. He made an 8-foot birdie putt, and then made three clutch par saves during a daunting stretch at PGA National.

He played it safe with a two-shot lead on the par-5 18th and made par to close with a 1-under 69 and the victory he needed to replace Luke Donald atop the world ranking that will be published Monday.

“It was tough today, especially seeing Tiger make a charge,” McIlroy said. “I knew par golf would probably be good enough. To shoot 1 under in these conditions, when you go into the round with the lead, is very nice. And I was just able to get the job done.”

Woods made two eagles in the final round and wound up two shots behind, along with Tom Gillis, who birdied the last hole for a 69.

McIlroy, who finished on 12-under 268, won for the fifth time in his career. Three of those are on the PGA Tour, including his record-setting victory in the U.S. Open last summer at Congressional.

He has finished out of the top five only once since the PGA Championship last August.

“There’s very few players as good at him at his age out there winning tournaments,” three-time major champion Padraig Harrington said. “There are guys with potential, but he’s already delivered. And he has a good balance in his life. He doesn’t look like a guy who is going to burn out. He looks like he’s going to be here for a while.”

McIlroy shared a big hug with his father, Gerry, as he walked off the 18th green. His parents have come to stay with him in south Florida through the Masters, where McIlroy figures to be a top favorite.

After a Sunday like this, no one will be quick to rule out Woods.

He was nine shots behind going into the final round, and even a 31 on the front nine in blustery conditions left him five shots behind McIlroy. But the finish - especially that 5-iron into the 18th green - was vintage Woods, and it at least gave him a chance.

“To me, it was the old Tiger back, the guy that I remember,” said Ernie Els, who played alongside him. “He never missed a shot or made a bad swing.”

Lee Westwood, playing two groups ahead of Woods, closed with a 63 to finish alone in fourth.

“It was a lot of fun out there,” Graeme McDowell said. “It was just roars going up all over the golf course. “For Rory to go out today with a two-shot lead and have Tiger shoot 62 on him and Westwood shoot 63, it just shows how hard it is to win golf tournaments on any tour in the world, but especially this tour.

“This golf season just got a lot more spicy.”