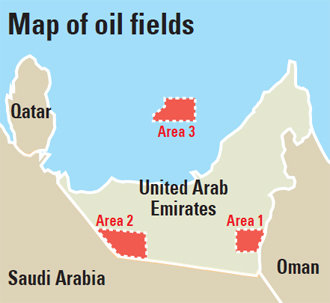 Korea has signed an official contract with the UAE to develop three oil fields in the Persian Gulf country, the government said yesterday.

According to the Ministry of Knowledge Economy, a consortium of the state-run Korea National Oil Corp. and GS Energy inked the agreement with Abu Dhabi National Oil. Under the contract, the consortium will own 40 percent of two land-based oil fields and one maritime field, and will develop them in conjunction with the other owners. KNOC will own 36 percent of the oil fields while GS Energy is entitled to 4 percent.

Although the consortium owns less than half of the oil fields, the ministry said that it would be able to import to Korea all of the crude oil produced there under certain unspecified circumstances, or “emergencies.” The contract is valid for the next 30 years.

Vice Minister of Knowledge Economy Cho Seok said there is no definite meaning of what constitutes an emergency but when something happens, the two countries would be able to discuss the issue.

After the signing of the contract, Mohammed bin Zayed Al Nahyan, the Crown Prince of Abu Dhabi, invited the Korean delegates to his palace.

“The message was conveyed to us that the contract will be implemented responsibly,” said Kwak Seung-jun, chairman of the Presidential Council for Future and Vision, who attended the signing event.

The UAE is considered a premium destination for oil development as only the United States, France, Britain and Japan are developing oil fields there. Japan entered the market in the 1970’s and Korea is the only newcomer since then. The three oil fields under the latest contract are believed to hold 570 million barrels of oil, equivalent to eight months of Korea’s oil needs. KNOC intends to produce 43,000 barrels of crude oil a day from 2014 at the earliest, the ministry said.